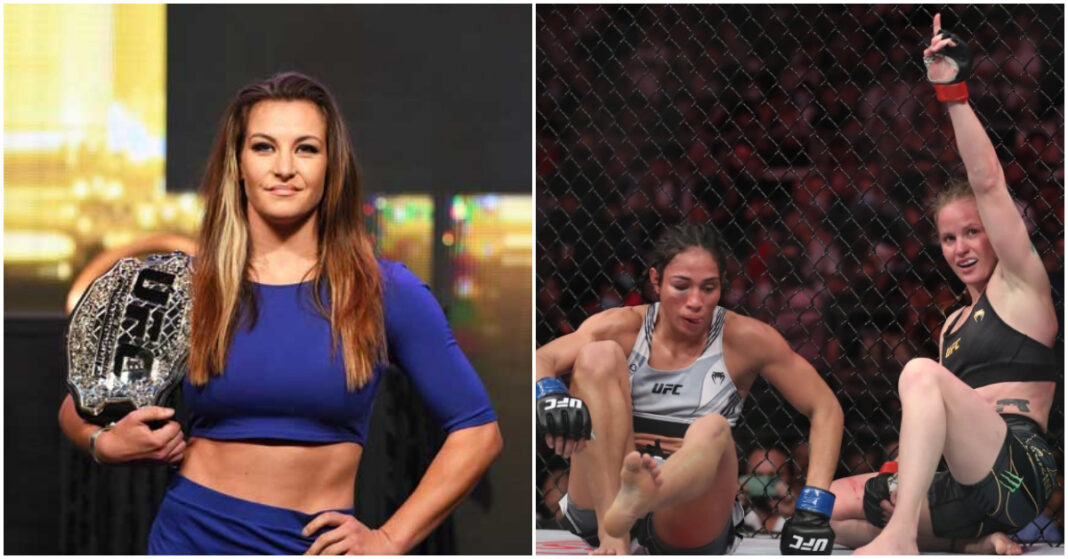 This past weekend, UFC women’s Flyweight champion Valentina Shevchenko defended her title against the challenger Taila Santors at UFC 275. ‘Bullet’ looked dominant as ever going into the bout on an eight-fight win streak. However, Santos snapped her commanding reign with a competitive performance that many argued to be enough to get the nod.

Although Santos did not beat Shevchenko, who managed to come out on top by a split decision, Miesha Tate believes she exposed a weakness in the flyweight queen’s game.

Miesha Tate believes she can win against Valentina Shevchenko

In a recent appearance on The MMA Hour with Ariel Helwani, ‘Cupcake’ talked about Shevchenko’s recent showing and said that she’d already identified the weak spots in her abilities during the Jennifer Maia fight in November 2020.

“When I saw Jennifer Maia get on top position, which was actually an error of Valentina’s… She was trying to get a takedown and slipped and ended on bottom. It also happened in the fight with Santos,” Tate said. “I just remember seeing Jennifer Maia hold her down and at that time, I never saw myself fighting at 125, so it didn’t really matter to me. But now, I watch that fight, I was absolutely salivating.”

Tate wanted to be the first one to definitively challenge Shevchenko.

“It was almost frustrating to see because for me, selfishly, I wanted to be the first one to say, like, ‘I knew this could be done.’ But now, people kind of see it.”

After Santos proved to be a tough challenge, Tate believes a similar performance against Shevchenko might not get her the same props.

“I didn’t want Valentina to look any less indestructible. I wanted her to stay where everybody thought she was so unbeatable because I already knew I could do that,” she said. “For me, it’s kind of like, ah, it’s been shown. “Now, people are going to believe in me more to be able to do it. I didn’t want that. I wanted to be the massive underdog. I wanted everybody to count me out.

“I wanted nobody to think Miesha Tate, five years retired, two kids, coming back 2-1 in the UFC, would be able to take out Valentina Shevchenko. But now, I think people can see a little bit of what I’ve been saying holds some water. I don’t know if that benefits me, but either way, the game plan hasn’t changed.”

Shevchenko named Tate during the post-fight scrum as a potential next opponent. Tate shared her thoughts on being called out by name by the champion.

“I know that she wants to fight me – it’s no secret,” she said. “I feel like everybody wants to fight me. I’m the uncrowned queen. I’ve got the target on my back almost as big as any champion.

“Everybody wants to take out the ‘Cupcake.’ But we’re going to get it done on July 2, and I think Valentina and I will lock horns. That’s the plan.”

Miesha Tate will take on Lauren Murphy at UFC 276 on July 2 in her flyweight debut.

Do you believe Miesha Tate will be able to snatch the gold from Valentina Shevchenko?