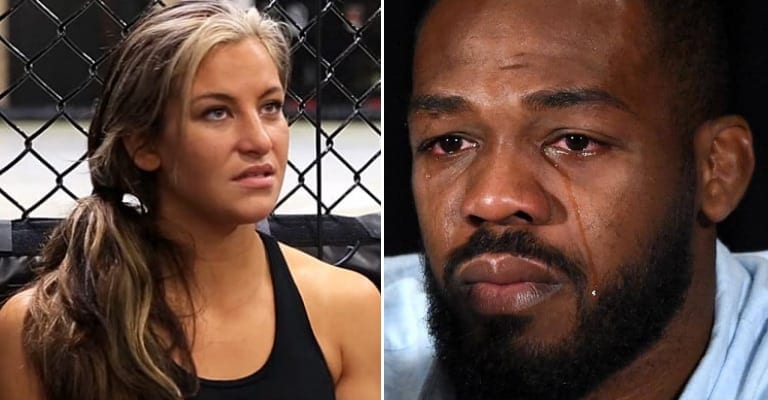 Earlier this week, former UFC light heavyweight champion Jon Jones issued a seething comeback to Miesha Tate‘s insistence that she was tired of hearing his ‘sob story’ as he played the victim every time he stood in his own way.

The criticism came the day after his highly-publicized hearing with the California State Athletic Commission (CSAC) where he offered scant little evidence but swearing to high Heaven that he hadn’t taken steroids prior to his UFC 214 win over Daniel Cormier – or ever. ‘Cupcake’ publicly voiced her displeasure at Jones’ behavior, focusing on how many times he found himself in needless outside-the-cage trouble.

Jones was quick to blast the former UFC women’s bantamweight champion by taking a thinly-veiled jab at her decision to retire in November 2016, adding that he didn’t quit when things got tough.

But Tate isn’t buying it.

She responded to Jones earlier today (Fri., March 2, 2018) by offering the belief that things didn’t necessarily get tough for him – he instead made them tough for himself:

@jonnybones u make things tougher 4 urself, I hope u can figure it out this time but I’m not holding my breath. Supported u plenty in the past & if ur implying I’m a quitter that’s pretty low. There’s a time when all of us have to stop & Happy I walked away with a clean slate https://t.co/uOuhVzPAG4

There’s no doubt Jones has had almost certainly the longest list of drug-related troubles in UFC history, both performance-enhancing and recreational.

He’s claimed innocence yet again, however, and after the CSAC fined him $205,000 and revoked his license last Tuesday, he’ll now have to appear before USADA to face what could be a lengthy suspension.

Every time he tells it, he’s innocent and the victim of strange circumstances beyond his control, an act that may be wearing thin on even fervent Jones supporters. He didn’t take long to respond to Tate again, this time saying he shouldn’t have responded to her in the first place:

@MieshaTate Never meet negativity with negativity, I shouldn’t have responded to you in the first place. You won

Whatever that means, many close to the situation feel that Jones simply hasn’t learned from his many lessons and second chances, and will continue to be reckless outside of fighting.

Tate called him out on it, and she wasn’t fond of the way he criticized her walking away from the fight game when she no longer felt the desire to compete.

Do you agree with the longtime women’s MMA star on Jones?