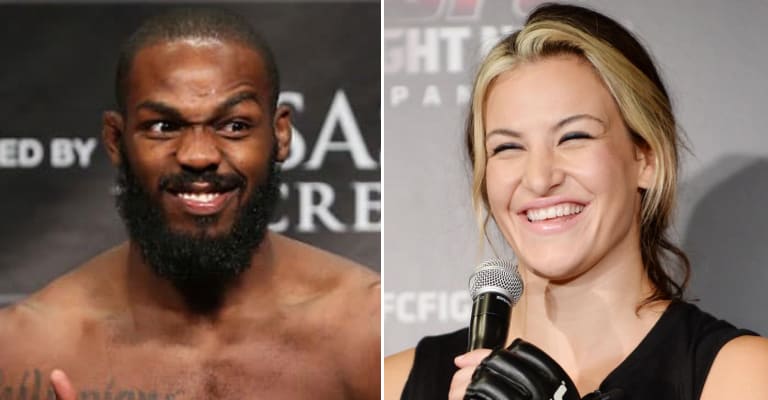 Tate was harsh on Jones during an appearance with MMA on SiriusXM for his repeated outside-the-cage troubles, noting that she no longer wanted to hear his ‘sob story’ after feeling sorry for him many times before (quotes via MMA Fighting):

“The thing is, I don’t really care at this point if he comes back because I’ve lost the motivation and the interest, and the faith that I have in Jon Jones has been lost,” Tate said. “Now maybe in three, four years, if he gets a great suspension [from the USADA], if he gets the book thrown at him and he really does make those changes, maybe he has a chance at restoring [his legacy], but at this point I just don’t care anymore. I don’t care. I’m over Jon Jones. I’m done with it.

“I don’t want to hear his sob story. I felt sorry for the first, second time he kind of had me. But it’s like, fool me once, shame on you; fool me twice, shame on me. Fool me three times, I mean, come on, am I waiting for a fourth now? I just don’t — I’m over it.

The retired women’s MMA star continued on that she did wish Jones would actually change, but after so many issues after he said he was a changed man, Jones would have to show her actions speak louder than words:

“I wish and I hope that it does change Jon Jones, but I’m also not invested in Jon Jones anymore,” Tate said. “I guess it’s what it is. I’m kind of checked out at this point. It’s just been too many times, too many instances. And I’ve heard this story one, two, three, four, five times already, so unless he shows me something different than just saying ‘I’m a changed man,’ he’s got to do a lot more to gain me back as a fan and to care to see him compete again. I just don’t want to be let down again.”

Jones found out about Tate’s disowning him as a fan, writing back to her on social media with a thinly-veiled shot accusing Tate of retiring when the going got tough before saying she might find ‘motivation’ in his life and to enjoy retirement:

@MieshaTate I don’t quit when things get tough for me, I get stronger. You just wait and see, maybe you’ll even find motivation in it. Sucks I lost you as a fan. Enjoy retirement sister

It would seem that Jones took Tate’s words rather hard to issue an almost immediate response containing so many seething accusations at the longtime women’s MMA veteran.

As Jones prepares to face a possibly lengthy suspension from USADA in his next drug-related hearing, this reaction may go along with the consensus that he had learned precious little and was behaving like the victim during a CSAC hearing where he admitted his manager had forged his signature on USADA-related tutorials.

Finding ‘motivation’ in having to constantly return from one drug-related issue to the next is a difficult situation to envision for Tate, who fought a literal whos-who of women’s MMA stars during a 10-year career in fighting where she won titles in three promotions.

She may not be the best fighter in her sport’s history like Jones arguably is, yet she’s hardly the first person whom Jones’ drug issue-tired victim act is wearing thin on.

What do you think about “Bones'” latest statement?