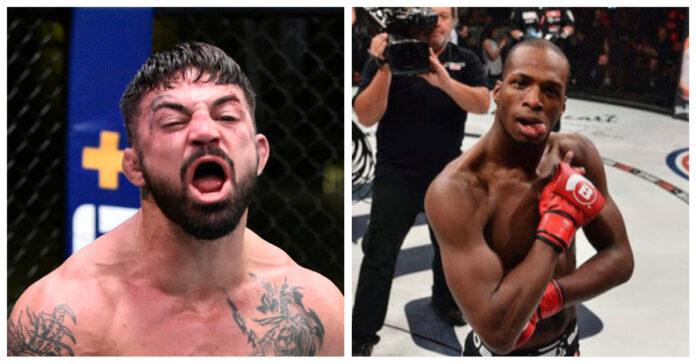 Michael ‘Venom’ Page will be taking on Mike Perry at BKFC 27.

‘Venom’ is reeling off a controversial split decision loss to Logan Storley at Bellator 281. MVP was on a six-fight win streak going into the fight and was defending his interim title in front of an English crowd. The second-ranked contender at welterweight in the promotion has received its blessing to compete under a different banner, a rare occasion in the sport of mixed martial arts.

Page will be facing off against the UFC veteran Mike Perry this August 20 in London. The two will take to the ring in a bare-knuckle contest under BKFC. MVP will remain with Bellator and is being allowed an exception for this sole event.

Meanwhile, Perry has remained out of action for over a year since his last outing against Daniel Rodriguez, which he lost via unanimous decision. ‘Platinum’ dropped four in his last five bouts in the UFC and the promotion chose not to offer him a new contract.

Perry moved on to sign a multi-fight deal with Bare Knuckle Fighting Championship following his free agency last April. His debut in the new sport came against Julian Lane at Knucklemania 2 in February. The 30-year-old Florida native came out on top in his first showing and will be looking to get another win against Page.

BKFC 27 will mark Michael Venom Page’s first outing in bare-knuckle fighting. The 35-year-old Englishman developed a reputation for his unorthodox style of striking. His antics during the fight and in celebration have brought him under fire from the community.

During his match with Cyborg Santos, Page landed a vicious flying knee to the head of Evangelista ‘Cyborg’ Santos to snatch a knockout win. Following the victory, Page would infamously throw a Pokeball at him to mimic the cartoon show.

Are you excited to see Michael Venom Page debut in BKFC against Mike Perry?