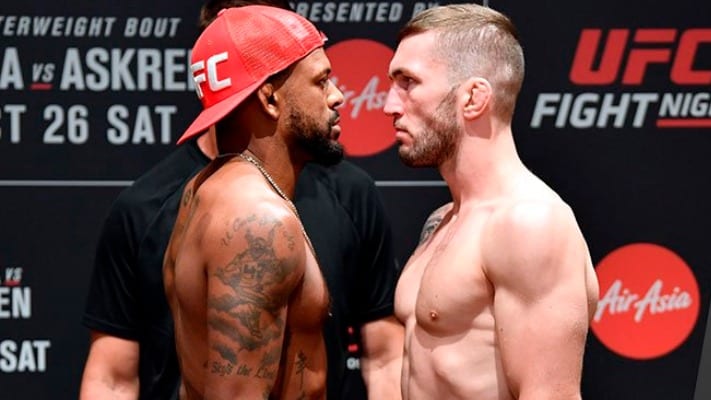 Ray with low kicks early and he has a takedown stuffed. More leg kicks from Ray. A nice left hand lands for Ray, who follows up with a right hook. A nice 1-2 counter combination from Ray lands. Both men land nicely inside the pocket. Johnson now starting to find a home for his jab. Johnson lands a nice left straight off a Ray low kick. The round comes to an end.

Johnson with a nice left hand and jab to open the round. Ray with a nice counter left hand but Johnson responds right back with one of his own. A beautiful combination connects for Johnson off a Ray leg kick again. Ray shoots in on a takedown again and has it stuffed. Some more nice combinations being put together by Johnson off counters.

Johnson is really putting his shots together well now and is getting into a flow. Yet another big counter shot combination from Johnson, and Ray responds with a leg kick. The round comes to an end.

Johnson continues to land nice counter shots off Ray’s attacks. A big left hand for Johnson lands. Ray has yet another takedown attempt stuffed. Ray gets in on the takedown and gets it this time. Now he has side control with Johnson against the cage, as he unloads ground-and-pound. More shots from Ray and he works to take Johnson’s back and does. Ray flattens Johnson out and lands some nice ground-and-pound. Full mount now and Ray continues to work. The round comes to an end.