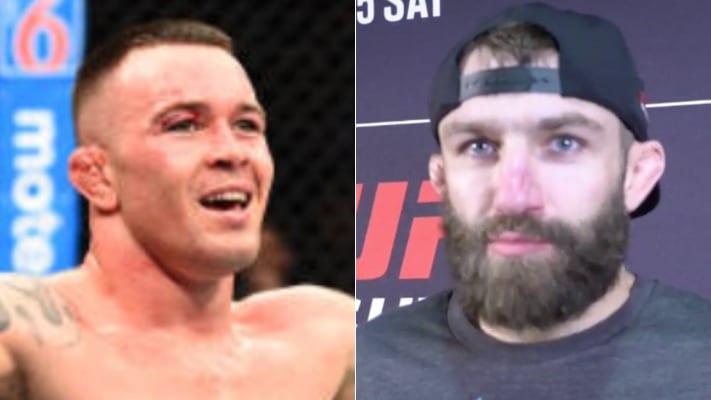 Michael Chiesa explained why he decided to call out Colby Covington.

Chiesa made it three wins in a row since moving up to welterweight when he outpointed Rafael dos Anjos in the co-main event of UFC Raleigh on Saturday night.

“Maverick” kept his post-fight interview short as he called out Covington soon after. It’s an intriguing matchup and one Chiesa feels he deserves given that he just beat the No. 5-ranked Dos Anjos.

“I just beat the No. 5 ranked guy in the world,” Chiesa told reporters after the fight (via MMA Junkie). “I always say the most important time to ask for a fight is after you win. You’ve got to capitalize. I’m not out to engage in some verbal pissing match with the guy. I respect his skills. He’s super tough. I’m just trying to get to a world title. I think that’s the fight that makes the most sense when you look at the top five.

“I said before the fight if I beat Rafael dos Anjos, I’m not fighting anyone who’s less than five. I’m taking his spot. Looking at the landscape of the division, that’s the fight that makes sense. I want to be tested. I want to fight the best, so Colby it is.”

Chiesa had his sights set on Covington a month ago when the latter failed in his attempt to win the welterweight title against Kamaru Usman at UFC 245.

Given how that fight played out along with other members of the top five being booked against each other, Chiesa felt no other matchup made sense.

“I waited to see how (UFC) 245 ended,” Chiesa added. “I wanted to see what happened with Tyron (Woodley) and Leon (Edwards) and everybody. I think it’s a fight that makes sense. I wouldn’t go ask for some outlandish matchup.

“Anytime I’ve won a fight and asked for an opponent, I’ve usually gotten it. That’s because it’s all well thought out. I just don’t throw things against the wall that aren’t going to stick. I just think it’s a fight that makes sense. I think it’s a fight I could get, so we’ll see what happens.”

What do you think of a Covington vs. Chiesa matchup?