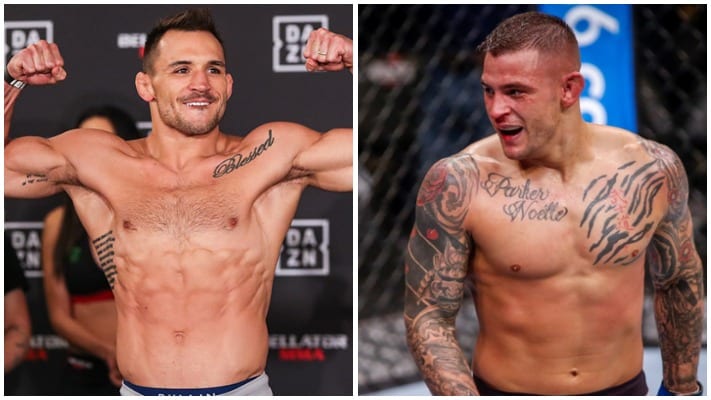 UFC newcomer Michael Chandler has shared his thoughts on top Lightweight contender Dustin Poirier’s preference not to face the former two-time Bellator champion stating that it is “a little bit weird.”

Chandler made his debut in the UFC against the number six ranked Dan Hooker in a co-main event slot on UFC 257’s ppv. In this bout Chandler was able to dispose of Hooker in the first round by devastating KO, however, this didn’t seem to be enough to entice the ‘would be’ title challenger Poirier into a matchup for the belt.

In an interview with MMA Fighting Chandler shared his thoughts. “I do think it’s a little bit weird, no matter what, who I was before UFC 257 is much different in the eyes of the fans, the media, the rankings than who I am now after UFC 257,” Chandler said.

“With the dominant performance that I put on against a guy that I finished in two-and-a-half minutes that took him 25 minutes to win a decision against. But Dustin Poirier is a champion in his own right. I believe he should be one half of the lightweight title picture, and it just remains to be seen who it will be.”

Following the action at UFC 257, where Poirier was able to secure himself his own knockout victory over MMA megastar Conor McGregor, UFC President Dana White appeared eager to put the soon to be vacant Lightweight title on the line in a bout between Poirier and Chandler, however, Poirier has since shared his preference to a rematch with McGregor, stating that he doesn’t believe Chandler has earned his shot at the title.

“You hear Poirier talking about the trilogy fight with Conor,” Chandler said. “We all know more likely than not will not be for the title, so in one sense he says he wants to be champion, but then the other sense he’s talking about, let’s be honest, money fights, eyeball fights, pay-per-view fights.”

In October of 2020, Lightweight champion Khabib Nurmagomedov shared his plans to retire from the sport, however, since then White has been confident that the champion would return. Following UFC 257, this confidence dissolved and White explained that the title would likely move on as Khabib has no imminent plans to return.

In his interview, Chandler doubled down affirming his goals stating that the title fight is the most important fight to him over potential money fights with stars of the Lightweight division.

“For me, given the landscape, or given if I was asked that question it’s not an easy decision necessarily, but I think I would lean toward getting that gold. Because with the gold comes everything else.”