LowKickMMA.com
Home UFC News Michael Chandler Promises to Put on a Show Against Tony Ferguson at... 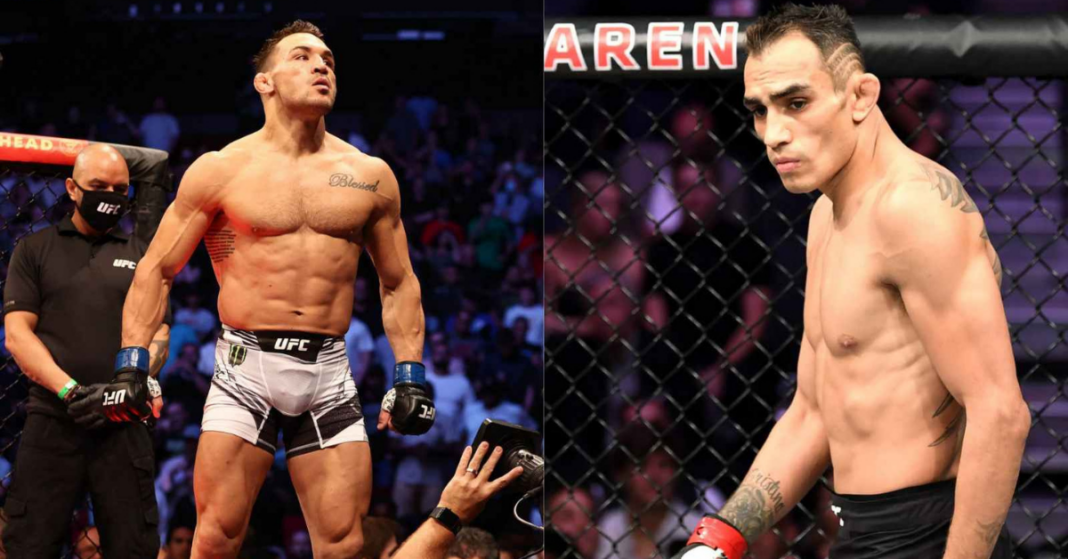 Michael Chandler has promised to put on a show for the fans against Tony Ferguson at UFC 274 this May 7 at the Footprint Center in Phoenix, Arizona.

Talking to Helen Yee Sports about his next bout, Chandler revealed Ferguson to be the first guy his team had approached when he made the switch from Bellator last year. Although UFC announced the fight last week, no contracts have been signed with only a verbal agreement in place between the two.

In his relatively short run in the organization so far, Chandler has become a fan favorite following his Fight of the Year performance against Justin Gaethje.

He’s become known for the signature ‘Michael Chandler in your face flair’ and is sure to put on a show for the fans as he tends to throw the game plan out the window in favor of a less surgical brawl.

“There’s not a fan on earth who wouldn’t want to see me re-match either of those guys (Justin Gaethje and Charles Oliveira),” said Chandler on the possibility of getting a title shot. Chandler and Ferguson have shared both opponents as he looks determined to become the UFC champion by the year-end given he beats Ferguson at UFC 274.

Michael Chandler confident Gilbert Burns will get the win

On fellow Sanford MMA teammate Gilbert Burns fighting Khamzat Chimaev on the same card, Michael Chandler said, “There’s not a lot of guys that I would tote as people who live a championship lifestyle. When I see the way Gilbert Burns carries himself, the way he shows up early to practice, he stays late, the way he also leads with a servant’s heart.”

“Khamzat is a beast. It’s a great test but I think it’s a very dangerous fight for Khamzat because I think Gilbert Burns is championship material. He’s unbreakable and I think he’s going to go out there and win,” said Chandler as he showed his support for Burns.

Who do you think will come out victorious at UFC 274, Michael Chandler or Tony Ferguson?