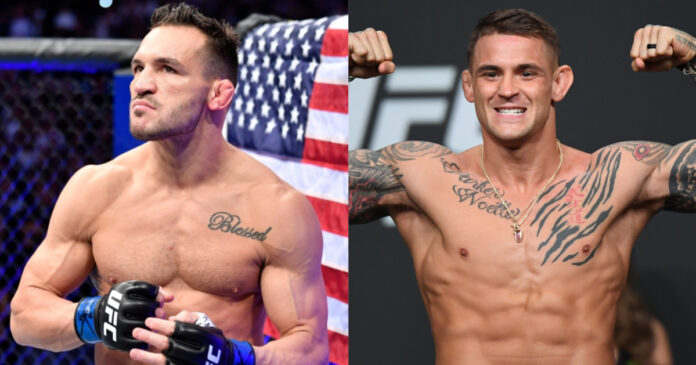 It was recently announced that after some back and forth, Michael Chandler and Dustin Poirier are set to do battle at Madison Square Garden on November 12.

A win for either man would catapult them back into title contention, but ahead of the bout, Chandler is questioning Poirier’s fire.

If you have watched any Michael Chandler performance, it is clear to see how motivated and how much desire he has to become champion. The former Bellator lightweight champion turns from a well-spoken, humble family man to a completely different animal once he enters the octagon.

However, when speaking to MMAFighting, Chandler questioned Poirier’s motivation leading into the bout, asking if ‘The Diamond’ still wakes up every day dreaming of becoming a champion like he does:

Chandler would add that the money earned from both recent Conor McGregor could harm Poirier’s progress.

“I think he’s one of the best in the world but he’s also had a couple Conor [McGregor] fights,” Chandler added. “He’s got a little bit of money in the bank, he’s getting older, it’s hard for him to make the weight, he’s talked about going up to 170. These are all tell-tale signs that I think this is the right time for me to fight him and the wrong time for him to fight me. That’s no disrespect against him. I want to compete against him. I compete against anybody in the top 5 that’s going to get me towards a title shot.” (H/T BJPenn.com)

Do you agree with Michael Chandler’s comments?