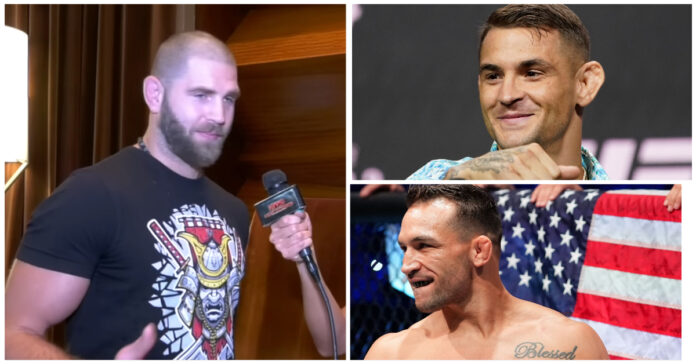 Jiri Prochazka has revealed that Dustin Poirier started the altercation with Michael Chandler at UFC 276.

This past Saturday, T-Mobile Arena in Paradise, NV was lit up with thrilling performances on a main card that had about no takedowns scored. From Alex Pereira’s vicious knockout of Sean Strickland to the masterclass Alex Volkanovski put on Max Holloway, UFC 276 was one for the books.

Michael Chandler & Dustin Poirier get into an argument at UFC 276

Another highlight from the night came outside of the cage when two top lightweights collided. A clip uploaded by Gilbert Burns to his Twitter captured the incident as it went down. Security and company staff can be seen separating ‘Iron’ Mike and Poirier after their initial scuffle.

Michael Chandler is coming off an incredible knockout win over Tony Ferguson at UFC 274. During his post-fight octagon interview, Chandler doubled down on his performance with an electrifying promo calling out Conor McGregor and Charles Oliveira.

Poirier took issue at the omission of his name and the two have been feuding ever since.

Jiri Prochazka revealed it was Poirier who started the altercation

UFC Light Heavyweight champion Jiri Prochazka was in attendance at the International Fight Week event supporting the headliner Israel Adesanya, who’s also signed to Paradigm Sports. Prochazka was closest to the action outside the octagon as he was right next to ‘Diamond’ when the situation escalated.

In an interview with Helen Yee, ‘The Czech Samurai’ talked about the infamous altercation between Chandler and Poirier.

“I was closest, next to Dustin and he started to be aggressive, to talk some trash talks and all this stuff for the Michael,” revealed Prochazka (ht sportskeeda). “And they start to talk together. Nothing surprised for me but I saved them [laughs]. I just watched that and there was a guy from the UFC and they tried to fix it.”

When probed by Yee about who started it, Prochazka revealed that it was Poirier who began to get fired up first before the 205 lbs king intervened, saying, “I think yeah.”