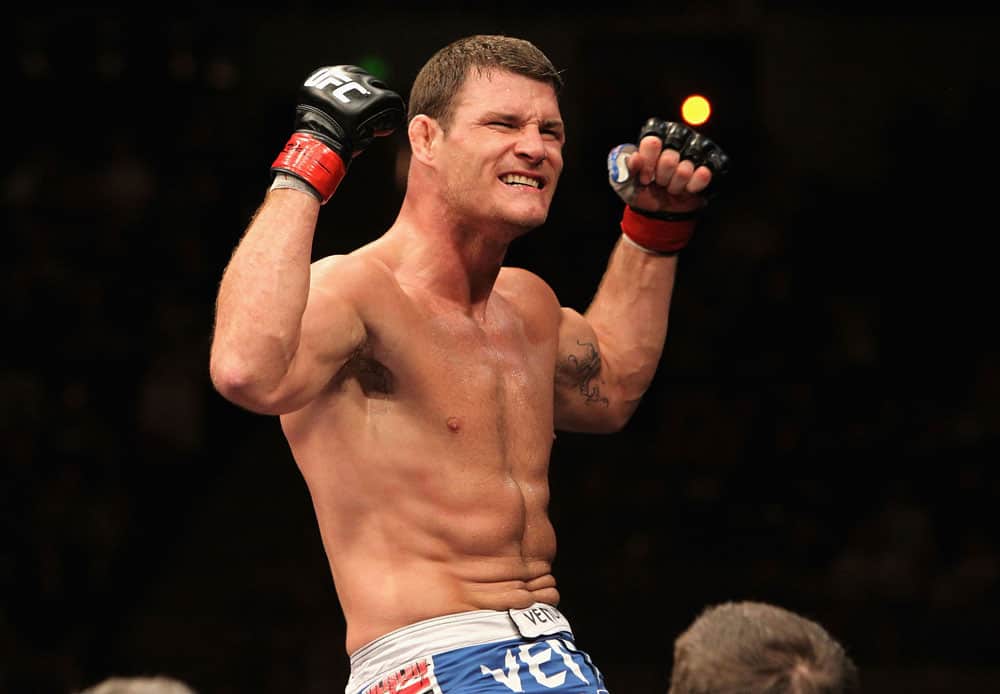 11-year MMA veteran Michael Bisping will return to action this weekend (Saturday April 25th, 2015) as he takes on C.B. Dollaway in the co-main event at UFC 186. Both “The Count” and “The Doberman” will look to bounce back from respective losses to Luke Rockhold and Lyoto Machida.

“The Dragon” and “Rocky” actually squared off last weekend (April 18th), with the latter getting the win in dominant form over the former light-heavyweight champion. With Rockhold now angling for a bout with middleweight champion Chris Weidman, his former opponent Michael Bisping told MMAJunkie.com that he isn’t convinced by “The All-American”:

“I’m still not convinced on Weidman, you know, he’s getting all smug up there as the champion. Let me tell you, I’ll snatch that belt right off of him. Luke Rockhold is going to beat Weidman later in the year. I’ll beat someone in summer, and then I’ll get my rematch with Rockhold. He head-butted me in that fight, and then this time next year, I’ll be the champion. There you go.”

The talk turned to the subject of Bisping’s next bout with Dollaway, and the Brash Brit claims that “The Doberman” won’t want to stand and trade in the octagon with him:

“He is a wrestler, the fight starts standing and I think he’ll be using his punches to try and get close to me. He’ll probably use low kicks, he likes to use the leg kicks, but this is all designed to get in to the clinch with me. Obviously I’m going to try and stop that, I’ve been working on my striking and I’ve got some creative tricks for him Saturday night.”

Certainly “The Count” has been a very competitive talent since joining the UFC off the back of The Ultimate Fighter: Shamrock vs Ortiz, but he’s always been just outside the title picture. Now aged 36, you have to wonder whether they’ll ever be a place for him in a UFC title fight. A win on Saturday is a must for that dream to stay alive.

READ:  Aussies Know How To Punch- MMA Fighting and Boxing in Australia

Having gone one-for-one in his last six fights, the Englishman has been unable to build a streak since 2010/11 when he got four wins on the bounce. He is nonetheless an entertaining fighter, and has no trouble earning a co-main spot on a PPV card, even coming off a loss.

Now is the time to prove it, if ever, and it all starts in Montreal, Quebec, Canada this coming Saturday. Stay tuned to LowKick for more UFC 186 hype and coverage!