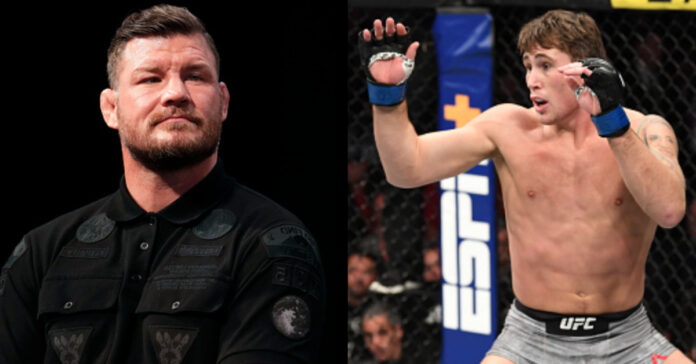 Former UFC middleweight champion Michael Bisping is still backing Darren Till to become a UFC champion despite his countryman’s recent woes inside the Octagon.

After scoring six straight wins under the UFC banner, Darren Till was rewarded with an opportunity at the promotion’s welterweight championship. At UFC 228, ‘The Gorilla’ met then-champion Tyron Woodley. Unfortunately, Till would come up short in his lone title opportunity, losing by way of second-round submission. That loss was the first in a string of bad luck for the fighter who opted to move up to middleweight after a knockout loss to Jorge Masvidal six months after facing Woodley.

Till won his first foray at 185 pounds, defeating Kelvin Gastelum via split decision. Since then, the Liverpudlian has dropped back-to-back fghts against Robert Whittaker and Derek Brunson. Despite being 1-4 in his last five, ‘The Count’ still believes that Daren Till will be a world champion.

“Darren Till – you’re laughing at me because he’s 1-3 in his last four – Darren Till will be champion one day,” Bisping said on his YouTube channel. “His striking is phenomenal. His mind is strong. He’s just had a bit of a bad run. And again, 29 years old. He’ll be champ.”

Speaking on his YouTube channel, Bisping also addressed the misconception that he is “salty” over Leon Edwards‘ big UFC welterweight title victory over Kamaru Usman at UFC 279. While ‘The Count’ admittedly took exception to ‘Rocky’ seemingly dismissing Bisping as the UFC’s first UK-born champion, ‘The Count’ has had nothing, but good things to say about the new welterweight king.

“People seem to think I’m salty that Leon (Edwards) won,” Bisping said. “I am over the goddamn moon for Leon, and I support every fighter from the U.K. Of course I wasn’t going to be the first and only one. We’re going to have a slew of champions coming from the U.K.“

Bisping also name-dropped No. 6 ranked heavyweight contender Tom Aspinall as a fighter he believes will be a heavyweight world champion.

Do you believe Darren Till and/or Tom Aspinall will be UFC world champions someday?