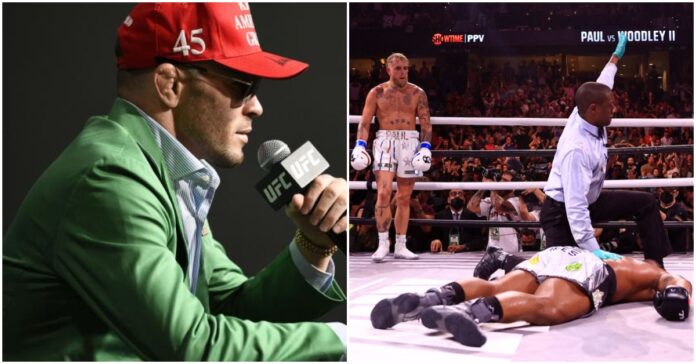 A few months on from Jake Paul’s epic knockout win over Tyron Woodley, Colby Covington is still convinced that his former opponent threw the fight.

Woodley faced criticism following his first fight with Paul for not following up after hurting his opponent. Many think this is because ‘The Problem Child’ inserts a “no knockout” clause into his fight contracts – something he has denied.

In the rematch, Woodley faceplanted after being cracked by Paul in the sixth round. Despite clearly being knocked out the former UFC champion was accused of taking a dive by many fight fans.

As of late, Woodley has gone radio silent. Meanwhile, Paul is preparing for his next fight.

Despite that, Covington hasn’t forgotten and isn’t prepared to let either man off the hook for what he thinks was a fixed fight.

“It was definitely a fix, you could tell, just the way he like signaled to him like, ‘Hey, okay, put your hand down, now you’re gonna take the knockout.’ And then you see Woodley’s mom, like she’s dancing around in the f**king octagon, like screaming right next to her son,” Covington said on The Full Send podcast. “Like, dude, your son just got knocked out and humiliated in front of the world and you’re f**king screaming happy?” (Transcribed by Sportskeeda)

Covington is coming off one of the biggest wins of his career after he dominated his former teammate turned bitter rival, Jorge Masvidal, at UFC 272 earlier this month.

‘Chaos’ has seen his short reign as the King of Miami dampened by ‘Gamebred’ who recently attacked him outside a restaurant in the city they share. Masvidal has since been arrested and is facing charges of aggravated battery and criminal mischief.

Do you agree with Colby Covington? Did Tyron Woodley take a dive in his rematch with Jake Paul?