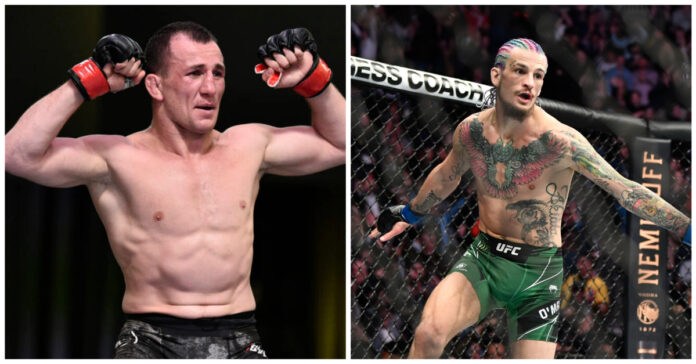 UFC fans were first introduced to Georgian in 2017 when he featured in an episode of Dana White’s Looking For a Fight. Merab Dvalishvili produced a stunning 15-second knockout to earn himself a UFC contract. Now almost five years on, riding a seven-fight win streak and coming off a stoppage win over former title challenger, Marlon Moraes, ‘The Machine’ is now in search of big fish.

Although on an impressive run, we have not seen Dvalishvili compete since September with seemingly no fight booked for the near future. However, talking with Ariel Helwani on The MMA Hour, Dvalishvili explained that this was no fault of his own.

“Every time the UFC reach us, they ask me, you wanna fight this guy, or this guy, at this time? Always yes, they know my answer.”

The Long Island trained Dvalishvili also stated that in an ideal world, his opponent of choice would be ‘Suga’ Sean O’Malley.

After a rough start in the UFC, losing his first two bouts, Dvalishvili has rebounded and now sees himself inserted into to the deep end of one of MMA’s most talented weight classes.

The 31-year-old also holds notable wins over Casey Kenny, John Dodson, and Cody Stamann. In 2019, while under contract with the UFC, Dvalishvili would compete in the 2019 Combat Sambo World Championship and would take home a silver medal.

Who would you like to see Merab Dvalishvili fight next?