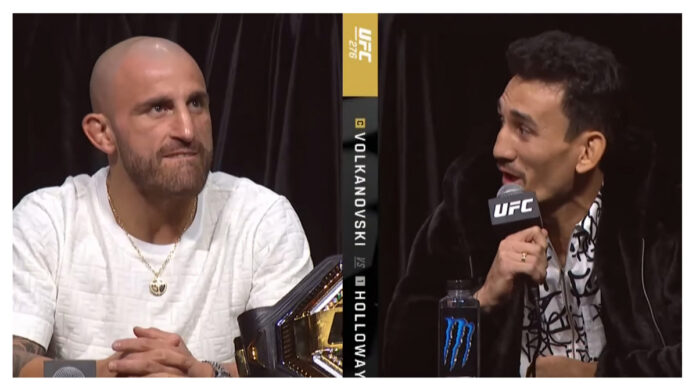 Max Holloway and Alex Volkanovski showed a different side to them ahead of UFC 276.

Current UFC Featherweight king Alex Volkanovski has established his presence as the top dog of the division. The second-ranked pound-for-pound fighter is coming off a commanding performance over Chan ‘The Korean Zombie’ Sung Jung in April. He was initially matched up to face Holloway for UFC 273 but the bout was pushed back after the 30-year-old Hawaiian was not given medical clearance.

Hosted during and on the tenth anniversary of, UFC is looking to cap off the International Fight Week with a solid event. They have traditionally been known to put together their strongest cards for the occasion and UFC 276 is no exception.

During the pre-fight press conference, Max Holloway got fired up talking about their trilogy bout. He did not miss an opportunity to fire shots at Volkanovski and kept bashing the 145-lbs champion throughout.

“This guy talking about a three-peat or something. This guy don’t even got three highlights in the UFC,” Holloway said before following up with a tiny mic drop on the table.

Volkanovski attempted to keep it cordial as he slipped and parried away the verbal jabs coming from his adversary. Holloway continued his tirade, something we rarely get to see from the ‘Blessed’.

“We’re talking about damage here,” Holloway added. “I’m known for taking damage and he’s known for not giving it.”

Volkanovski could not resist after hearing that one and fired right back saying, “That’s why he can’t spar anymore, got punched in the head too much,” he added. “Saturday night, it ends for you that’s it.”

UFC 276 will be headlined by the middleweight title contest between Israel Adesanya and Jared Cannonier. Alex Volkanovski vs. Max Holloway will serve as the co-main event of the night on July 2 at the T-Mobile Arena in Paradise, NV.