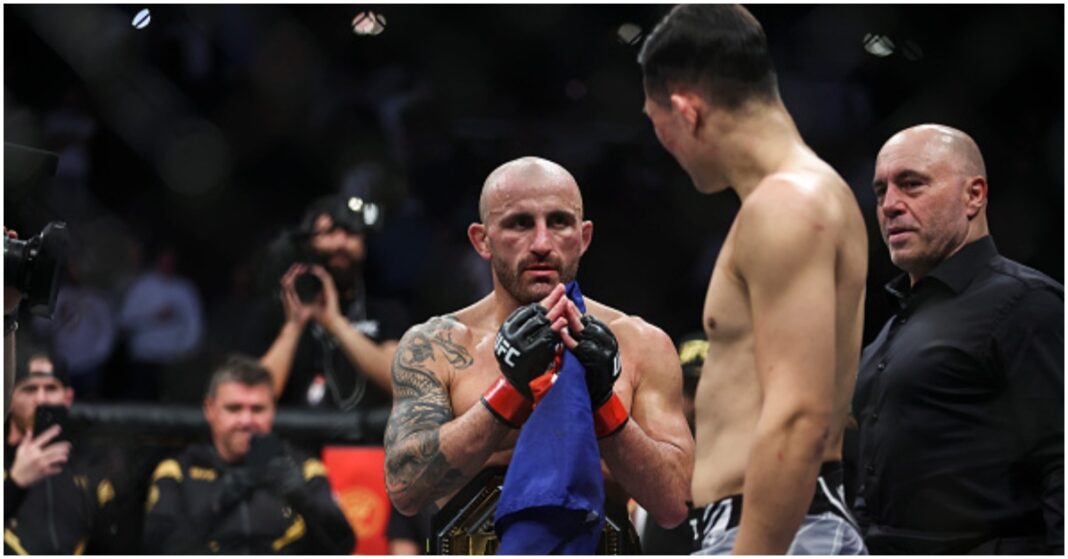 UFC 273 featured an impressive array of thrilling fights, and unsurprisingly the main event between Alexander Volkanovski and Chan Sung Jung was one of the most compelling of the night.

Heart and determination were on display as the featherweight champion Volkanovski delivered a beat-down on the Korean Zombie. ‘TKZ’ hung tough and never gave up, but the champion was just too sharp and picked him apart in every round.

The damage was rapidly adding up as the fight became more one-sided. Fans, media, and even Volkanovski himself began to grow increasingly concerned for ‘TKZ’ and his safety. He’d been dropped and wobbled many times by vicious strikes and combos from the champion, and at certain points, it looked very questionable as to if Chan Sung Jung should continue or not.

As the fourth round began and both men would advance to touch gloves, Alexander Volkanovski would strive to ensure his opponent still wanted to compete.

“You alright brother?” Volkanovski would ask as they touched gloves. ‘TKZ’ would nod, but the champion would ask again, double-checking. Jung would give an affirmative and the action would ensue, however, not for long. 45 seconds later and a flurry of heavy strikes would cause referee Herb Dean to stop the fight, saving ‘TKZ’ from any more damage.

After the fight, Joe Rogan would interview the champion, who would go on to say Jung actually took, “…A lot more damage then I wanted him to.”

Following this impressive victory, Volkanovski is now riding a 21 fight winning streak, including four consecutive title fight wins and 11 UFC victories. Everything points to the trilogy fight between Alexander Volkanovski and Max Holloway being next, while Chan Sung Jung will surely need a long time to recover from such a hard-fought battle.

What are your thoughts on the main event of UFC 273? Leave a comment below of your favorite moments from the card!