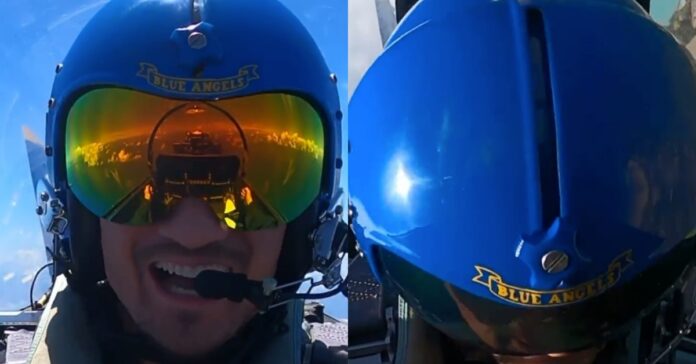 Former UFC featherweight champion, Max Holloway, has infamously failed to suffer a knockout loss, or even find himself on the receiving end of a knockdown in his promotional tenure, however, the Hawaiian has poked fun at falling unconscious during a trip on a fighter jet earlier this week.

Holloway, both a former interim and undisputed featherweight champion, slumped to his third career defeat against the dominant, Alexander Volkanovski at UFC 276 last month during International Fight Week – bludgeoned en route to a unanimous decision loss.

The loss snapped a run of two impressive back-to-back victories for Max Holloway over both Calvin Kattar, and then Yair Rodriguez – retaining his number one contender status at 145lbs with his unanimous decision-earning efforts against both.

Poking fun at a recent incident earlier this week, Holloway posted footage of himself taking part in a fighter jet flight – falling unconscious due to what appears to the effects of g-force, claiming his long-standing streak of remaining conscious has come to an end.

“Sadly my “never been KO’d” streak came to an end (laughing face emoji),” Max Holloway tweeted. “I was blessed with the opportunity to fly with Blue Angels. Shout to number 7 pilot, Griffin Stangel and everyone behind the scenes for the unreal experience. This once in a lifetime ride I will never forget. Thank you.”

Scooping the interim title back in December 2016, Holloway defeated Anthony Pettis, before stopping Jose Aldo in back-to-back fights to unify and then defend the featherweight titles. Scoring a pair of successful title knockbacks, Holloway turned in an all-time great performance against Brian Ortega en route to a doctor’s stoppage win, before defeating former lightweight best, Frankie Edgar in another dominant win.

Remaining the number one ranked contender despite his loss to Volkanovski last month, Holloway, who is yet to book his Octagon return, has been linked with potential matchups against the likes of both Josh Emmett, and Arnold Allen, next.