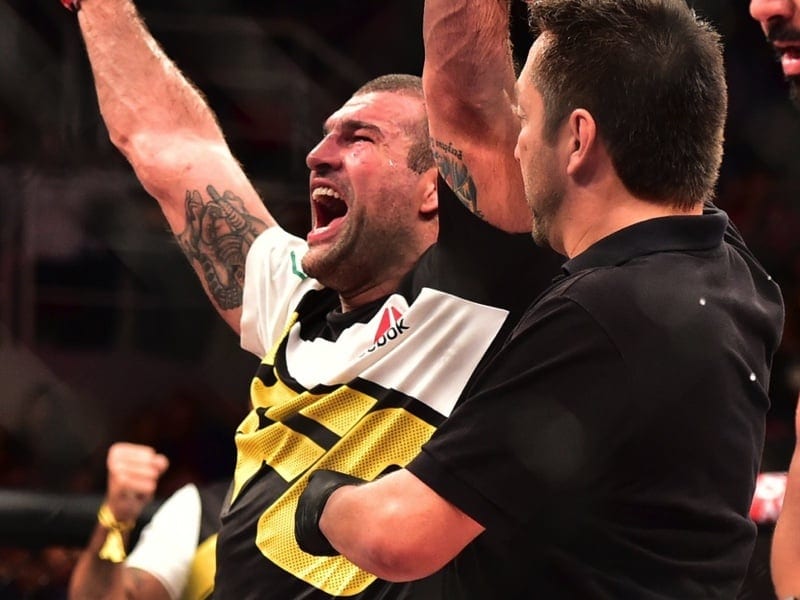 Fan favorite MMA legend ‘Shogun’ Rua may have withdrawn from his anticipated light heavyweight showdown with Rashad Evans at April 16’s UFC on FOX 19 due to a lingering knee injury from wars past, but it appears that the former UFC and Pride champ will return to the Octagon sooner than expected.

This evening a report surfaced from MMA Fighting stating that Rua would take on rising 26-year-old prospect Corey Anderson at May 14’s UFC 198 from his hometown of Curitiba, Brazil. The bout has since been confirmed, and will join an already stacked main card featuring the awaited heavyweight title bout between Fabricio Werdum and Stipe Miocic.

‘Shogun’ is understandably regarded as one of the finest 205-pound fighters in MMA history, but has fallen on mixed results lately following endless slugfests against the elite fighters in the world. Rua most recently got back into the win column with a decision victory over Antonio Rogerio Nogueira in UFC 190’s “Fight of the Night” last August, but before that win he had dropped four out of five contests with three stoppage losses.

Rua returns to his hometown, where he won his two first MMA contests several years ago.

He’s still ranked in the Top 10 of the extremely shallow UFC light heavyweight division, however, and he’ll look to regain momentum against a very tough challenge in one of the division’s few young prospects in Anderson. ”Beastin’ 25/8′ has won three straight fights after getting knocked out by Gian Villante in April 2015, most recently outlasting veteran Tom Lawlor by unanimous decision at UFC 196 after doing the same to Fabio Maldonado and Jan Blachowicz.

The TUF 19 light heavyweight winner will seek what would rank as by far his highest profile win over ‘Shogun.’

In other action, at UFC 198, top Brazilian fighters Ronaldo Souza and Vitor Belfort will face off in the co-main event, top-ranked Brazilian welterweight Demian Maia will face the gritty Matt Brown, and Antonio Rogerio Nogueira will meet Patrick Cummins.