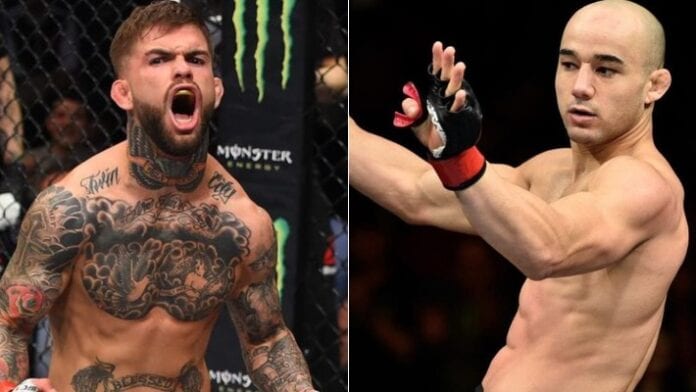 Marlon Moraes is the latest fighter to test positive for COVID-19.

Moraes made the revelation in an interview with ESPN Brazil on Monday, adding that he felt symptoms around 10 days prior. His wife was also infected but his children remain unaffected.

“Unfortunately, I got the virus — me and my wife,” Moraes said. “We were very weak, the symptoms were very strong on us. Thank God I didn’t need to go to the hospital, but I had to take my wife to the hospital. We spent a day at the hospital. She was treated by them, she took some medicines, then she stayed under observation.”

Although weakened a bit, “Magic” made sure to catch the vacant bantamweight title bout between Petr Yan and Jose Aldo at UFC 251 this past weekend. Despite the animosity he had with Aldo following his controversial split decision win over him in December, Moraes was hoping for his compatriot to emerge victorious.

In the end, Yan came away with the fifth-round TKO win to become the new champion

“It was a good fight, José Aldo is a legend of the sport,” he said. “I thought he had a good fight, he showed that he wanted to win, but Yan was better than him and we have to respect him. Aldo is not very used to losing, but in the sport, unfortunately one wins and one loses, so we have to support him. Unfortunately the belt didn’t come [home]. I’m here, other Brazilians are also in the race.”

Garbrandt Next Fight For Moraes?

The question now turns to who Yan should defend his title against first.

Moraes was originally scheduled to face Yan at UFC Kazakhstan last month before the event was canceled and is certainly a contender among others such as Aljamain Sterling.

However, Moraes claims to have accepted a fight with Cody Garbrandt for next month and is just waiting to hear from the promotion at the moment.

“The fight [the UFC has] to do now is me versus Cody,” Moraes added. “And I think they will put [Aljamain] Sterling to fight Yan and whoever wins between me and Cody will be the next to fight for the belt.

Who do you have winning in a Moraes vs. Garbrandt matchup?