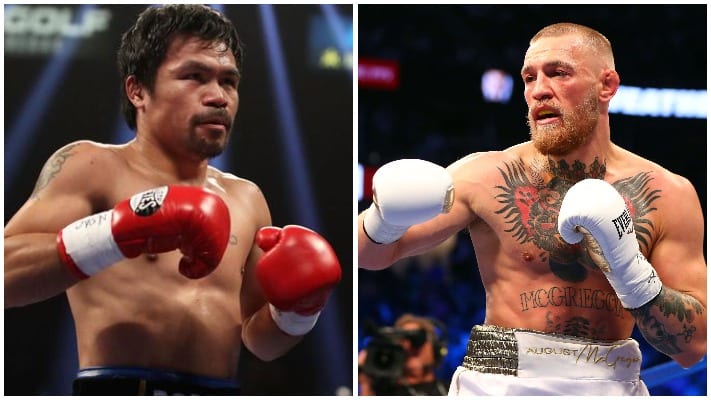 Boxing legend Manny Pacquiao has confirmed he will face off against former dual-weight UFC champion Conor McGregor who broke news of the fight late last night.

‘Notorious’ originally took to social media to explain to fans why he decided to retire from fighting earlier this year while also simultaneously trying to line up a bout against MMA legend Diego Sanchez.

“To Diego Sanchez… I seen your recent comments about your final bout and I am in! After you fought Pereira, I had requested for myself and you to compete in Dublin,” McGregor wrote. “This was back in February when I was working on opposition for my season, pre covid. Good luck this weekend!”

McGregor finished off his series of tweets by revealing he is set for his second boxing match, this time against Filipino legend Manny Pacquiao, he said.

“Anyway all water under the bridge who gives a fook. I’m boxing Manny Pacquiao next in the Middle East.”

Since then a spokesperson for Pacquiao has confirmed the bout will take place in the Middle East.

“For the sake of all the Filipino Covid-19 victims, Senator Manny Pacquiao will be fighting UFC superstar Conor McGregor next year. The huge portion of his earnings will proceed to those who are affected nationwide by the pandemic,” Pacquiao’s office said.

McGregor hasn’t fought since beating Donald ‘Cowboy’ Cerrone at UFC 246 earlier this year. The Irishman needed just 40 seconds to score a KO victory over the MMA veteran. McGregor has fought professionally in boxing just once back in 2017. ‘Notorious’ fought Floyd Mayweather in his debut and managed to last 10 rounds before being stopped on his feet

Eight-division world champion Pacquiao who turns 42 in December has not been seen in the boxing ring since he picked up a unanimous decision win over Keith Thurman. ‘Pac-Man’ dropped Thurman in round one and ultimately beat him over 12 rounds in July 2019.

Do you think Conor McGregor will be able to compete with Manny Pacquiao?