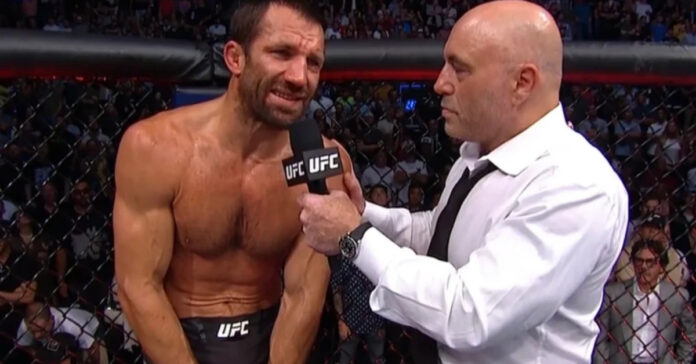 Luke Rockhold may have announced his retirement but he refuses to rule out a possible return.

Coming off a hard-fought loss to former title challenger Paulo Costa at UFC 278, former UFC middleweight champion Rockhold marked his return to action after a three-year hiatus. Immediately following the result, Rockhold declared that he would be hanging up the gloves, content with his time in the sport.

However, all may not be as it seems.

Luke Rockhold has retired but could return to fighting

In a recent video uploaded to the YouTube account of The Mac Life, Luke Rockhold talked about his retirement from fighting. While he is satisfied stepping away, he did not dismiss all possibilities of a comeback.

“Sometimes, I struggle back and forth thinking how I’m going to approach this but too many people hide behind their words, not how they really feel,” Rockhold said. “I want to retire, I want to work on life like I did a fraction of my break. I want to get my body together, my health together. Health is wealth, ultimately. My body’s deteriorating and fighting doesn’t help that. I want to get my body back but I’ll never close the door.

“Once I get my health fully back, I get my body where I want, and I start performing and not hurting myself, maybe make another run at this thing. One, two, three years down the line. I honestly feel like I’m only getting better. The way I’m treating my body changing the game. Take out alcohol from your life for the most part, considerably, at least for the heavier sh*t, and see how far your life goes.”

Rockhold endured through the higher elevation of Salt Lake City, Utah to end his career on a high note despite having an unfavorable result in his final bout.

Do you want to see Luke Rockhold return to fighting?