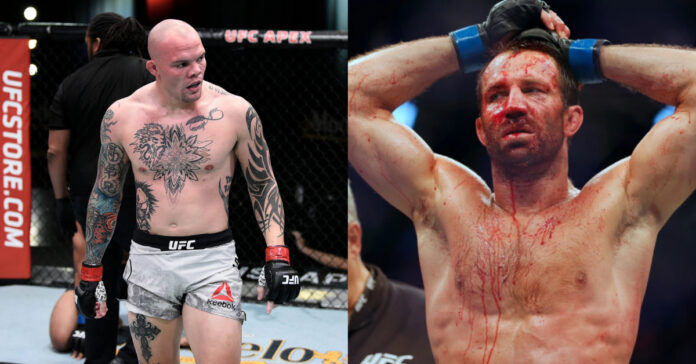 Anthony Smith, alongside many within the community, has heaped praise onto Luke Rockhold following his fierce performance against Paulo Costa in the co-main event of UFC 278.

Despite dropping a unanimous decision to Costa, it was clear to see that Rockhold had gained the respect of all of those watching for his display of toughness in his first return to the octagon since 2019. This matchup called a curtain on what has been a fantastic career for the American who had to overcome adversity on more than one occasion to make his way through the full 15 minutes.

His performance was tipped by an emotional post-fight interview something not necessarily associated with himself which won over the respect of all spectators even further.

Speaking on the ‘Believe You Me’ Podcast, Smith had nothing but respect and admiration for the toughness put on display by the former champion who deserves to leave competing behind with his held head high following his final outing.

At times it appeared Luke Rockhold was ready to call it a day inside the octagon after showing extreme signs of fatigue after returning from an extended layoff whilst also having to compete at a high altitude. However, in every moment this occurred Rockhold dug deep to surprise his opponent with his sheer willingness to continue coming forward and unwillingness to quit on himself.

Despite Smith not having the best personal relationship with Luke Rockhold that did not stop him from giving him the respect he so rightly deserved following on from UFC 278.

“I see Luke Rockhold quitting, I’m watching him look for the door,” Smith said. “He’s looking for a way out and then decided not to take it, and that happened more than twice. It happened more than three times where he decided I don’t f—king want to be here anymore and on his way to quitting, turned around before he got there and battled his way back into it. Personally, Luke and I don’t like each other.”

“But I can respect being exhausted, being in a really hard fight with a really heavy hitter, with a guy who’s walking you down, and you’re so f—king tired you can’t even breathe, and you got your nose splashed all the way across your face, you can barely stand up but still mustering the ability to battle back and stay in there and kind of give the fans a treat they didn’t deserve, because you should have been finished a long time ago.” (Transcribed by MMAMania)

Despite not gaining the competitive victory in his final outing that Rockhold may have wanted he undoubtedly secured himself a moral one gaining even more respect from the thousands watching him compete one final time.

What did you make of Luke Rockhold’s performance at UFC 278?