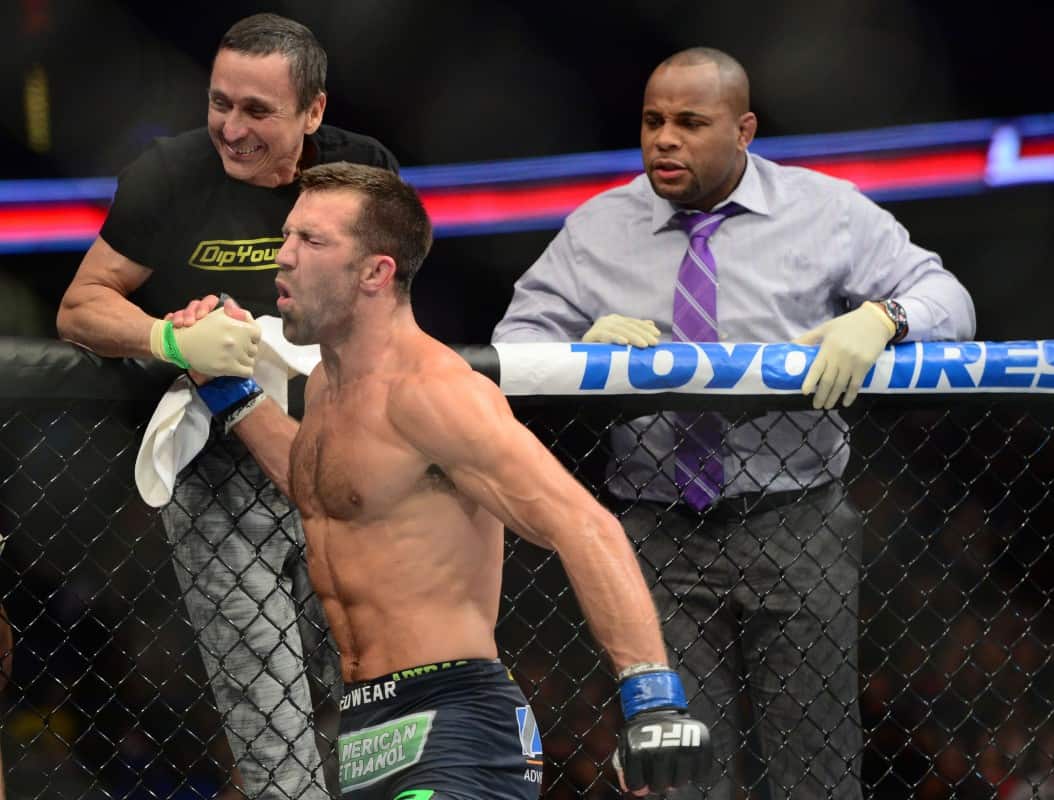 UFC 187 went down this past weekend (May 23, 2015) and middleweight champion Chris Weidman finally made his return in the co-main event, scoring a first-round TKO victory over longtime rival Vitor “The Phenom” Belfort. Despite it being a rather dominant win for “The All-American”, No. 1-ranked Luke Rockhold did not see the win as all that impressive.

Speaking with Bleacher Report, Rockhold said that a deflated Belfort with no heart showed up. In his first fight without the use of testosterone-replacement-therapy (TRT) “The Phenom” looked much smaller and clearly didn’t perform like his old self. Rockhold noted the champ’s toughness, but said that the win proved nothing:

“He fought a deflated Belfort. Vitor had no heart,” Rockhold said on Wednesday afternoon. “Look at the difference in him when he showed up last week to what we’ve seen in the past. Chris is a tough guy, but that fight didn’t prove anything. Vitor had one burst, and then he was done. He quit.”

With Weidman finally healthy and finally getting by Belfort, talk has quickly turned to just who the champion will meet next. Rockhold is the presumable No. 1-contender, as he has won four-straight including four finishes. The American Kickboxing Academy (AKA) product believes that he undoubtedly deserves the next shot, but UFC president Dana White hinted that No. 2-ranked Ronaldo “Jacare” Souza could also earn the shot. Souza has won eight-straight and five-straight in the UFC, albeit probably against lesser competition than Rockhold.

Despite no official confirmation, Rockhold is acting as if he has been awarded the title shot, and even has a date in mind for a showdown with the champion. He would like to faceoff with Weidman in September in Las Vegas, but that may not be the champ’s first choice. With the possibility of mixed martial arts being legalized in New York and a UFC card being held at Madison Square Garden in December, Weidman is obviously hoping to defend his title next in his home state.

December may be a little longer then Rockhold would like to wait, but the No. 1-ranked 185-pounder has a bold plan:

“I’ll beat him (Weidman) in September in Las Vegas, and then we can have a rematch for my belt in Madison Square Garden,” Rockhold said.

For Weidman, it doesn’t matter if Rockhold or “Jacare” is next, as the champ recently stated that would run right through either man, but Rockhold seems to disagree, saying that he’s a tactician, and he’s more comfortable than the champ everywhere whether that be on the feet or on the ground:

“I’m better than him everywhere,” Rockhold said. “I see it as a fight that will be on the feet. He’s used to guys that don’t want to go to the ground with him, but I don’t mind the ground. I am going to control the fight and I’m going to get in his face. I’m not going anywhere.

“I’m a tactician. I’m a southpaw,” he concluded. “Everything matches up perfectly for me.”

What kind of chance does Rockhold have when and if he meets the middleweight king?