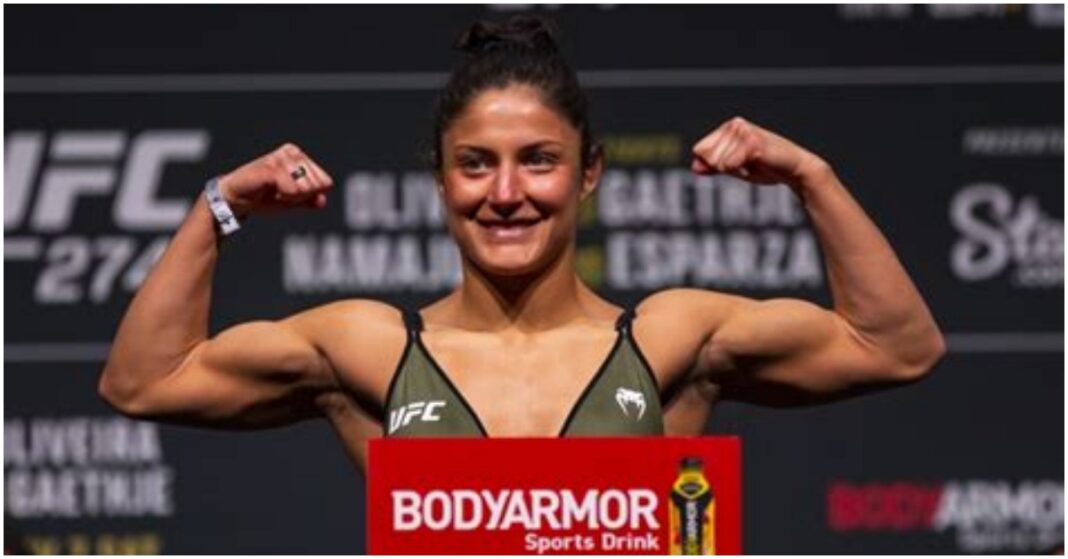 After competing in her fifth UFC bout, Lupita ‘Loopy’ Godinez spoke to James Lynch in a LowKick MMA Exclusive, discussing her recent dominant victory at UFC 274 and what will come next for the strawweight prospect.

‘Loopy’ Godinez discusses UFC 274 win and what comes next

“Loopy” Godinez improved to 8-2 and now has pieced together back-to-back wins under the biggest MMA promotion on the planet, with her confidence now clearly rising as she continues to move forward. ‘Loopy’ Godinez looked dominant against the very tough Brazilian standout in Ariane Carnelossi, controlling the action for the full 15 minutes in impressive fashion.

Speaking with Lynch, Godinez stated that “I said it before in an interview, I said I wanted to look really dominant.” Her intentions in the octagon were clear, sticking to a solid game plan that resulted in her scoring a truly dominant win, undoubtedly drawing even more attention her way.

Godinez continued to discuss how her preparation for this fight was perfect, noting that she felt great during the buildup to the bout. This was her first non-short notice fight in the UFC, and the impact of her preparation was evident. Now with such a decisive win under her belt, Godinez believes she is in an ideal position to begin moving toward the top of the division.

“If you look at the division, I don’t see anyone like me,’ proclaimed Godinez. ‘We’ve seen good strikers, we’ve seen good grapplers, but it’s only one thing. I feel like I’m well rounded and can do anything.”

Moving forward, Godinez expressed her interest in staying active and fighting consistently, a fact that should come as no surprise to fans of the sport, considering she fought four times in 2021 alone. She stated that “I [would] like to fight next weekend.” When asked about who she would prefer to fight, Godinez was quick to state that she is happy to “go with the flow” as long as it keeps sending her towards the top of the division.

Will ‘Loopy’ Godinez get another quick fight booked and will it be against a top 15 strawweight?