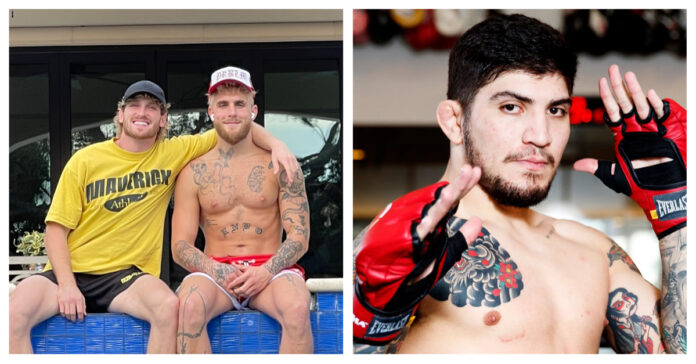 Social media star Logan Paul has recently claimed that his growing dispute with MMA fighter Dillion Danis (2-0 MMA) took a turn for the worse during a trip with his brother to New York.

Both Logan and Jake Paul have been publicly ‘trolling’ Danis on social media; trading insults for some time now.

It all seemed harmless name-calling to many, with the Paul brothers gaining a reputation for such antics.

However, ‘El Jefe’ hasn’t quite seen it that way, as Logan Paul revealed on the ‘Flagrant 2 podcast’ what were the ugly events unfolded after he and his crew bumped into Danis during a trip to the Big Apple.

“He’s one of the best jiu-jitsu guys in the world, actually, here in New York one time, because you know Dillon, me and Jake and all have been beefing for some time…”

“We were at a party, this was when Dillon was on crutches, one of his boys pulled a gun on Mike [Majlak – Paul’s friend and podcast co-host].”

The feud between Danis and the Paul brothers began after a boxing fight between him, and Jake Paul fell through towards the backend of 2020.

The SBG fighter hasn’t fought since 2019, and although the 28-year-old is finding himself in the headlines, unfortunately for him it’s not been the ones you want to be in.

During his time away Dillon Danis hasn’t managed to keep himself out of trouble as he continues to lose a considerable amount of public following and interest.

In September 2021, Danis was arrested and charged with disorderly conduct after an incident at a bar in New Jersey. A bad night got worse for Brazilian Black-Belt after footage of his arrest was revealed, which showed him being choked out by a security guard, began to circulate online.

Do you think Logan Paul Vs Dillion Danis will ever happen?