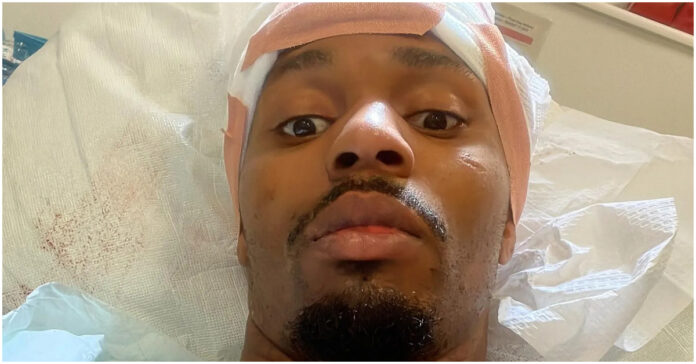 Lerone Murphy ended up in the hospital after getting into a cycling accident.

Earlier today, the undefeated UFC featherweight took to Instagram to share a photo of himself in a hospital bed. Murphy opened up about why he was at the hospital and revealed that he could’ve suffered a more unfortunate fate had the medical assistance not been quickly available to respond.

“Ffs I can’t catch a break. Another near death experience 🙏🏾. Yesterday while cycling, a oncoming car turned right without looking and we collided at speed. Which caused a nasty head wound 🤕The ambulance took 45minutes to arrive which nearly caused me to bleed out. Im here still breathing for a greater purpose clearly 🙏🏾💫”

Murphy’s recent close encounter marks his second near-death experience. The 30-year-old Englishman was shot three times in a suburb of Manchester three years before he became a professional fighter. The bullets struck his face and neck. Murphy has cited the first incident as a source of motivation that turned his life around.

Remaining undefeated with 11 wins in 12 fights, Lerone Murphy will be looking to extend his win streak to four in his next fight. ‘The Miracle’ has racked up victories over Makwan Amirkhani, Douglas Silva de Andrade, and Ricardo Ramos in his last three outings. Having never tasted defeated, the closest he has come to dropping a bout was a draw with Zubaira Tukhugov.

Although his next fight has not been solidified yet, chances are he was hoping to land a spot on the card for UFC London given the home advantage he would enjoy. It remains to be seen whether Murphy will be able to recover in that time or will need to wait longer to get back to action inside the cage.

Do you want to see Lerone Murphy fight at UFC London?