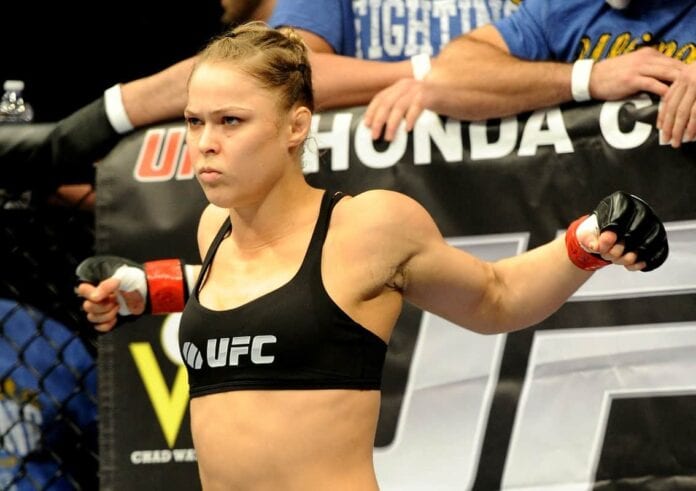 To put it plain and simple, reigning UFC women’s bantamweight champion “Rowdy” Ronda Rousey doesn’t need to fight. She has already proven that she is by far the best in the world at 135-pounds, and there seems to be very little logical threats to dethrone her. Financially she seems to be set as well, as she has become a global superstar with many different opportunities arising.

That being said, her mentor, “Judo” Gene LeBell, who spoke up to Submission Radio, said that he doesn’t want the “Rowdy” one to stick around fighting too long until it gets to the point where her body is suffering. He also touched on what fighters should be doing outside of the cage for their future:

“I don’t want her hurt by fighting too long,” LeBell told Submission Radio. “And you can be the best in the world and catch a punch or a kick and it can hurt you. I’ve got injuries that, you know, they were over within a couple of days when you’re young. 20 years later, you come back and you’re limping around, ‘oh I remember when I hurt my knee’ and it comes back on you.

“The only initial investment you have is your body. You know, that’s in MMA, Football, Soccer, Basketball. Your body is your initial investment. I recommend all MMA fighters get a second job. In other words, I’ve had people that are real good, and then they can’t make it anymore and they made lots of money, and then they’re out of a job. Have another vocation, another avocation, another job. Something that you can go back on.”

Outside of the cage it seems as if Rousey already has another job waiting for her in acting. The dominant champion has already appeared in multiple films, and is set to star in Mile 22, and a remake of Roadhouse. “Judo” Gene mentioned the benefit of doing movies, also noting that he would like to see his protégé go out on top:

“She could become one and she would be very good, but why? Because she wouldn’t go on the road, and drive from one town to the next to make things. She might do a spot-show once in a while, but it’s better to do movies. ‘Cause in movies, if they play it again, even if you have a small part – like you talk about Rocky. I get residuals. I must have gotten thousands of dollars in residuals from that, and in dollars, American dollars. And once you do wrestling, that’s it. Plus I got life time insurance, which is very important and for me and my family, and that’s a good thing.

“I love pro wrestling. I wrestled pro on-and-off for 20 years. I love it. It was the way of life. But I think she’s better off doing movies, and I personally would like to see her retire while she’s on top.”

How much longer do you see Rousey fighting?