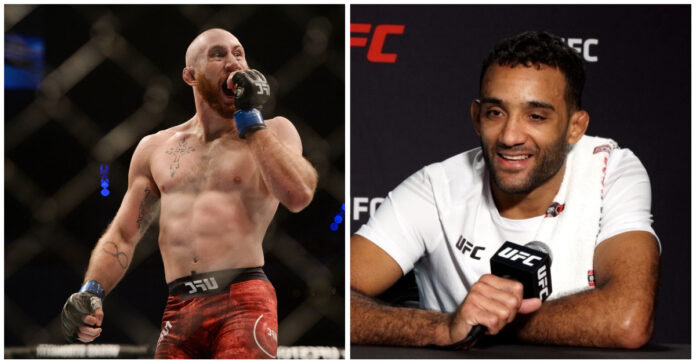 Kyle Nelson has predicted a finish against Jai Herbert in their upcoming bout at UFC London.

Nelson, who’s traditionally competed at featherweight in the UFC, will make the move up to lightweight when he takes on Herbert. He’ll mark his return to action after a two-year hiatus, coming off a hard loss to Billy Quarantillo at UFC Fight Night 177 in Sep. 2020. After making an unsuccessful promotional debut on short notice, Nelson has gone 1-3 in his last four with a sole coming over Marco Polo Reyes.

On the other hand, Herbert shares the same record for his last four outings, with the single victory against Khama Worthy before his latest outing, where he also suffered a devastating knockout loss to Ilia Topuria.

In an exclusive interview with LowKick MMA, Kyle Nelson talked about his fight with Herbert this Saturday and shared a bold prediction.

“Yeah, we’ve seen Jai get knocked out by other guys, even Ilia Topuria, kind of a smaller guy,” Nelson said. “When he faces a guy with my kind of power, which I don’t think he has yet, yeah he’s going to be going to sleep pretty quick.”

Considering how close both fighters’ records are, it appears to be an evenly split contest although “The Monster” has only suffered two losses by KO or TKO whereas Herbert has three.

When asked whether it would have an impact mentally on his performance, Nelson answered to the contrary recalling similar experiences he’s had in the past.

“No, not at all,” he added. “I’ve fought in Mexico before, and again obviously Mexico has a huge fight culture. I was fighting the hometown guy there, and I finished him early. I won the crowd over and that’s what I plan to do in London.”

UFC London is set to go down on July 23 at the O2 Arena in London, England.