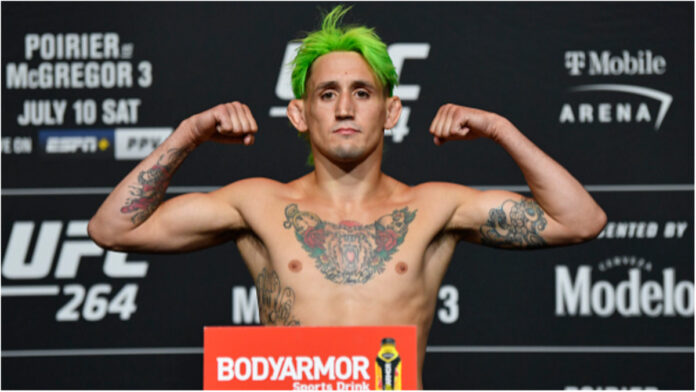 After just two fights in the UFC Kris Moutinho has been released, and in his opinion, it’s a decision made too soon.

Bursting onto the scene out of nowhere in mid-2021, fans immediately were drawn to Moutinho because of his fascinating green hair, and the heart he displayed when he fought Sean O’Malley at UFC 264 on short notice.

That fight against O’Malley fully demonstrated the true grit and determination that Moutinho possessed, as he absorbed ridiculous damage round after round but never quit or even seemingly took a step back. Ultimately the referee called a stop to the fight in the third round. It seemed to truly be one of those instances where the referee saved a fighter from themselves, as the mysterious green-haired slugger showed no signs of backing down from the onslaught of ‘Suga’.

The loss to Sean O’Malley wouldn’t spell the doom of Moutinho’s career though, as the UFC gave him another chance against Guido Cannetti. A fighter that Moutinho felt was served to him as a sacrificial pawn, however, things would prove to go down quite differently. Cannetti would in fact make short work of Kris Moutinho, finishing him via KO/TKO just a few minutes into the fight. This would spell the doom for his short-lived UFC career, but according to the green-haired slugger, it was a decision made way too soon.

“I wish I would’ve gotten one more,” said Moutinho, in an interview with Talkin’ MMA (transcripts via MMA News). “It is what it is, though, you know what I mean? I can’t explain why they decided to do things…”

“It’s their business, their company,” Kris Moutinho continued. “I was given a fight, my last fight, against Guido (Cannetti)…nobody’s a bum in the UFC, I don’t care what anybody says…it’s the best organization in the world with the best depth in every weight class.”

The green-haired slugger went on to describe how he felt the UFC had matched him up with Cannetti to feed him a win. Losing, of course, sealed his fate.

“(Cannetti) was a guy who was on a losing streak, they gave him to me to win, and that’s why they cut me,” Kris Moutinho sighed. “I lost to a guy I should’ve beat…I don’t care if whether the stoppage was early or if I could’ve kept going, maybe I would have won the fight…I can’t go back in time and change things. I wish I had got another shot because I’ve seen guys lose multiple fights in a row and get three or four fights to go out there and do it, but man it was a lesson, a lesson learned.”

Since his UFC release, the 30-year-old Moutinho has competed in a Jiu Jitsu match, with claims that he may even take a boxing match next.

What are your thoughts on Kris Moutinho’s release and his future?