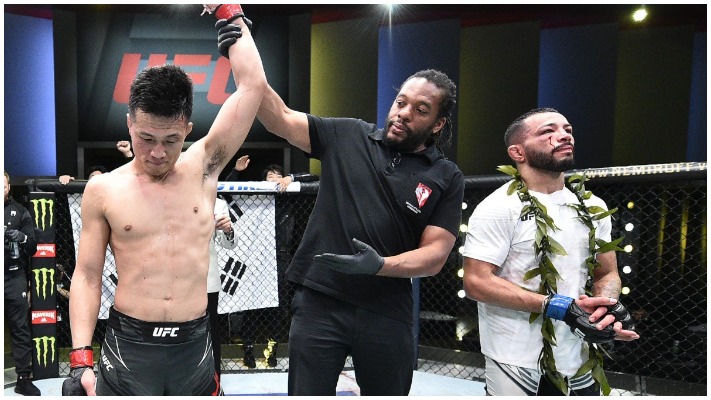 ‘The Korean Zombie’ picked up an impressive win over Dan Ige after five rounds of fighting in the UFC Vegas 29 main event last night.

Jung’s win became even more impressive post-fight when his coach, Eddie Cha, revealed his fighter suffered a dislocated shoulder in the second round of the bout.

“Out of all of the UFC main events he’s had, this is the first one he’s had a decision,” Cha said on the ESPN+ post-fight show. “He’s kind of disappointed in it, but at the same time, he did pop his shoulder in and out.”

Last night, was not the first time ‘The Korean Zombie’ has dislocated his shoulder in a fight. In August 2013, Jung separated his shoulder when he challenged Jose Aldo for the featherweight title at UFC 163. The injury allowed ‘Scarface’ to close the show with a barrage of unanswered strikes. At UFC Vegas 29, Jung managed to work through the injury before his shoulder eventually popped back into place.

“(It’s the) same shoulder that he messed up in the Aldo fight,” Cha said. “He won’t ever say that kind of stuff, that’s why I kind of just put it in there. … In the second round when he went for the takedown and took his back, that’s when it kind of popped in and out a little bit. We were constantly telling him to raise his hands. Then, after the fight, he was like, ‘That’s why I couldn’t raise my hand.’ I was like, ‘Oh, OK.’” (Transcribed by MMA Junkie)

‘The Korean Zombie’ rallied through the injury to score a significant win over Ige. The judges unanimously awarded Jung the victory with scorecards of 48-47, 49-46, and 49-46.

Did you notice ‘The Korean Zombie’ was injured during the UFC Vegas 29 main event?