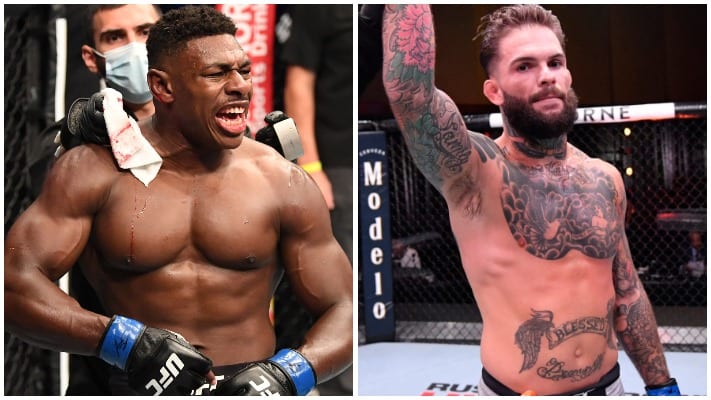 MMA has survived a year that scored knockout blows on several other sports. The UFC along with their rivals have continued to churn our events despite the fact COVID-19 has brought the majority of the world to a standstill.

The events delivered big time as did the athletes who put on epic fights, scored big knockouts and even helped us win a few big bets. If you’re going to backing your picks in 2021 head to https://askbettors.com/ for the best odds.

This award is for the best KO 2020 had to offer. We at LowKickMMA asked each of our writers to make their picks and the majority opted for Joaquin Buckley who scored our KO of the year against Impa Kasangany in October. Check out our staff picks below…

Joaquin Buckley is the clear winner of KO of the year in my eyes. No-one else even comes close. It was perfect technique, execution and resulted in a devastating finish. I believe in 10, 20 or even 50 years’ time people will still be talking about this finish.

There was nothing flashy about this knockout, except for the speed in which it happened. In what was a must win fight for him, Garbrandt patiently took his time, waited for Assuncao to over commit, then launched a light-speed right hand into his jaw. It was literally a blink-and-you-missed-it type of thing, one that viewers brains couldn’t comprehend in real time. All we knew before the super slo-mo replay was that Assuncao was conscious one second and lying face down the next. The fact that it beat the buzzer to end the second round is just the cherry on the sundae. It was a perfectly placed bomb that would make Dan Henderson blush, and it deserves a place on the all-time list.

Joaquin Buckley vs. Impa Kasanganay — stands out as the most innovative finish this year IMO. Gained massive exposure on socials for the UFC, with the promotion utilising it to foster interest in Buckley.

This stands out of all the 2020 KO’s just for the fact that we’ve never seen anything like it. It turned Buckley into a star overnight and people were waiting for his next fight and what made this more impressive is that all the hype heading into that fight was the undefeated (at the time) Impa Kasanganay and Buckley just stole all that from him.