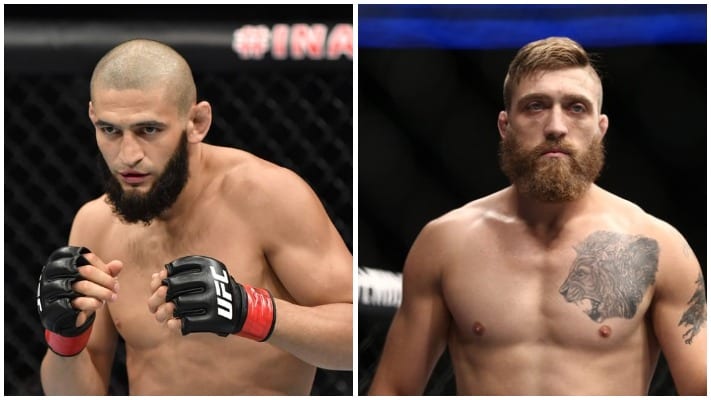 The newest star in the UFC, Khamzat Chimaev will make his eagerly anticipated U.S. debut on September 19. He is expected to fight Gerald Meerschaert at middleweight on the undercard of Tyron Woodley vs. Colby Covington which takes place in Las Vegas.

Raphael Marinho of Combate broke the news on social media, he wrote.

“Dana White said he is negotiating Demian Maia x Khamzat Chimaev for Ilha da Luta, but that the Russian will fight in Las Vegas first. From what I’ve learned, the UFC is negotiating for Chimaev to face Gerald Meerschaert on the September 19 card, at middleweight (up to 84kg). #feedmma”

This news comes shortly after it was revealed Chimaev had finally been granted a U.S. visa. UFC president Dana White previously revealed he was struggling to get Chimaev into the country and was unable to schedule another fight for the Russian until that hurdle had been cleared.

Chimaev scored back-to-back victories on ‘Fight Island’ in July. The 26-year-old made his UFC debut at middleweight against John Phillips. He dominated the first round before sinking in a submission early in round two. Ten days later and Chimaev was back action again – this time competing at welterweight. Once again he dominated the fight and managed to stop UFC newcomer Rhys McKee inside one round.

Post-fight White revealed he was hoping to book Chimaev’s third fight with the promotion for UFC 252. The undefeated prospect then began calling out the biggest and best fighters at welterweight including Demian Maia, Conor McGregor, Mike Perry, and even the 170lb champ, Kamaru Usman. Unfortunately, that didn’t happen and fans have been forced to wait a little longer than anticipated to see Chimaev back in action.

Right now the plan is for Chimaev to fight Meerschaert on September 19 before taking on Demian Maia in October. ‘GM3’ doesn’t like that plan which seems to write off his chances against the undefeated Russian.

“He’s not leaving the cage physically able to fight in October,” Meerschaert wrote on Twitter.

Who do you think will win on September 19? Khamzat Chimaev or Gerald Meerschaert?