LowKickMMA.com
Home UFC News Khamzat Chimaev could be fast-tracked for the title shot after UFC 279,... 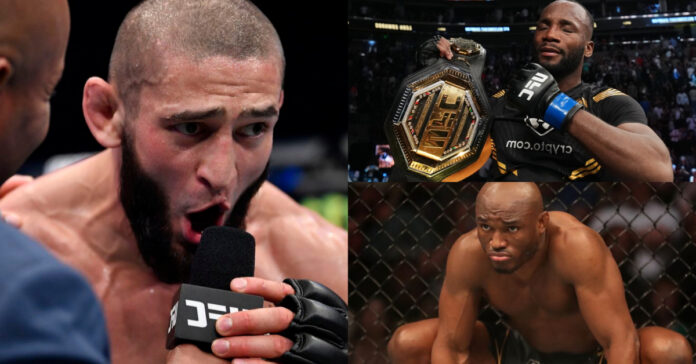 Leon Edwards’ coach, Dave Lovell, is not fully convinced the new champion has his next outing confirmed.

Coming off a historic upset over the former champion and pound-for-pound king Kamaru Usman, Edwards became only the second-ever British UFC title holder, with the first being Michael Bisping. Considering how dominant Usman had been during his run, an immediate trilogy bout looked set for the two men, but Edwards’ team is not sold just yet.

Rising prospect Khamzat Chimaev is scheduled to take on Nate Diaz this weekend in the main event of UFC 279 on Sep. 10 at T-Mobile Arena in Las Vegas, Nevada. Although company president Dana White stated the bout would be a top contender contest, Edwards’ shocking win could have thrown a monkey wrench in the mix of title contention.

Coach Lovell believes that the UFC could be looking to help Chimaev leapfrog Usman for a shot at the gold, given he beats Diaz in a quick fashion.

“If that’s the script, so be it,” coach Lovell said via MMA Nytt. “But you never know how these things work. There’s a lot of wheeling and dealing behind closed doors. We’re in a dirty game, and you’ve got to know to play your cards and keep them tight to your chest. You know, I know, they’re gearing up this Khamzat guy.

“Khamzat Chimaev is their next cash cow, and they’re fast-tracking him. So listen, it’s not a foregone conclusion that we’re going to get Usman.”

Lovell thinks Usman would be different in his return

Edwards not only won the title, but he also handed Usman the first knockout loss of his career. According to coach Lovell, “The Nigerian Nightmare” may not return to fighting the same.

“He’s never been knocked out, Lovell continued. “It’s one thing a fighter getting dropped and getting counted out while he’s still conscious, or taken a body shot and couldn’t get up from it, or getting stopped on his feet with the referee pulled the other guy off him, but when you get knocked out in a fight where you just wake up and think, ‘What’s happened?’ Let me tell you, it’s a life-changing event, and I’m not just talking about fighting, I’m talking life itself.”

Who do you want Edwards to face, Kamaru Usman or Khamzat Chimaev?