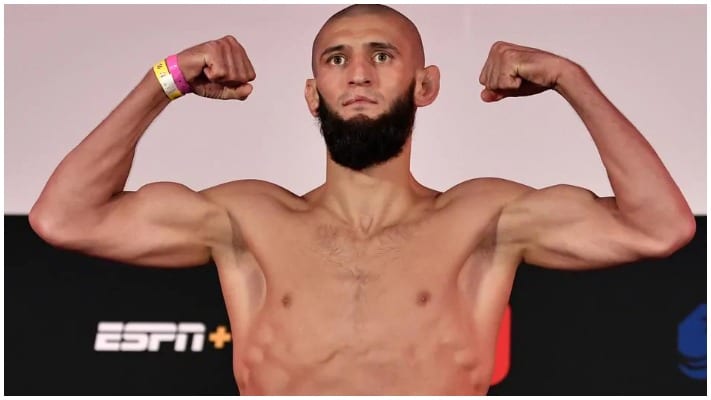 UFC prospect Khamzat Chimaev is looking to make a statement when he fights for the first time since July at UFC Fight Night: Covington vs. Woodley this weekend.

The Swedish fighter is now scheduled to fight long-time UFC middleweight Meerschaert on Saturday before taking on BJJ legend Demian Maia next month. Many including Meerschaert have found the double-booking to be disrespectful but Chimaev doesn’t seem to understand that notion.

“I don’t know why he’s disrespected,” Chimaev told reporters during the UFC Vegas 11 virtual media day. “Amateur boxing people go with five or six fights. I go fight here and now after one month, but I did in 10 days two fights. I don’t know why he feels like this.”

The two men have already bumped into each other at the fighter hotel and Chimaev told reporters exactly what went down.

“He speaks too much, he talks too much,” Chimaev said. “He say, ‘You disrespect me.’ I didn’t like that. I said, ‘I’m going to smash you, chicken.’ And he say nothing and I go from there.”

“I’m better everywhere,” Chimaev explained. “I’m better wrestling, I’m better grappling. I’m better in striking. No one going to stop me. … I don’t know what’s going to happen on Saturday night, but I’m going to go 100 percent to kill this guy. That’s what I know. With everything to finish him.’” (Transcribed by MMA Junkie)

Do you think Khamzat Chimaev will keep his hype train going by beating Gerald Meerschaert at UFC Vegas 11?