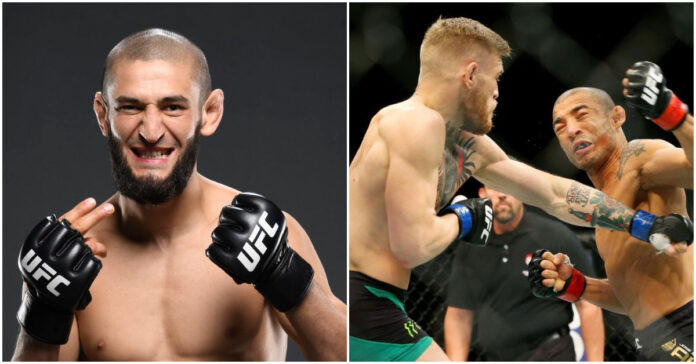 Rising UFC prospect Khamzat Chimaev has shared the story of how watching Conor McGregor knock out Jose Aldo at UFC 194 was the catalyst that made him start fighting.

In an interview with ESPN’s Brett Okamoto, Chimaev revealed that he started believing that the money could be there for him as a fighter after watching the spectacle of the fastest knockout in a UFC championship fight.

“I see the guy (McGregor) knock him out. I was thinking if that light guy did that s**t, then why is it the end of it for me?

“Mentally, I’m stronger than him, my body’s bigger than him. I was feeling if, at that time, I just meet him outside, I can break him, you know. If he makes that money, why not me?”

Khamzat Chimaev moved to Sweden with his mother when he was 19 years old after his brother advised them to join him there. Things weren’t easy for the young ‘Borz’ as he moved to a new place with no prior knowledge of the language and no certainty of what was ahead.

The Chechen fighter shared how rough the early days were for the family when they moved, and it becomes clearer how important a role Khamzat’s mother has in his life. He goes into detail about the sacrifices she made and how he feels a need to constantly improve her life before anything else.

“One year it was hard for me. I had it rough. Why I come here? Why we stay here? Then it becomes normal. If you stay someplace long time it becomes like, your home, you know.”

“Always inside of me, I’m going to find some ways to make my life better,” added Chimaev.

“She thinks always about us. When I was young, you don’t understand why she gives her food to us. She was waiting for us, we finish the food and the things that’s left, she’ll eat this one.

“Now, when I’ve become older, I understand what she did that time. Now I want to give back everything. That’s why I always feel like I have to make her life as much better as possible.

It’s no surprise Khamzat Chimaev has become one of the most recognized fan favorites with an incredible record of a 100% finish rate in his ten-fight resume so far. He has a lot of hype surrounding his performances and will face his toughest challenge yet in Gilbert Burns at UFC 273 this April 9.

Do you believe Khamzat Chimaev will live up to the hype against Gilbert Burns at UFC 273?