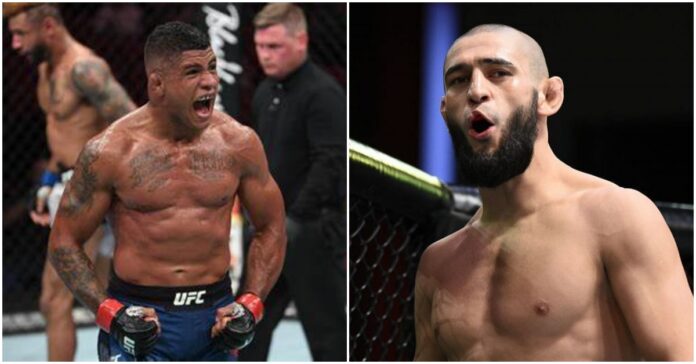 ‘Durinho’ thinks ‘Borz’ is “very good for sure” but also believes the public is overhyping him.

“I think he’s very good for sure. People are getting crazy excited, ‘He got blah, blah, whatever.’ The way we say in Portuguese, ‘We don’t lie but be make it bigger.’ He’s not a lie but we make it bigger. He’s not a lie,” Burns said during an interview with The Underground’s John Morgan. “The guy is very good but we made him a super monster. I don’t think. I think he’s very very good, high-level wrestling, good striking, heavy hands, we saw a couple of knockouts, good grappling; but I don’t see like, ‘Wow, that monster.”

Since moving up from lightweight to welterweight Burns looked unstoppable going on a six-fight win streak.

This would lead to a title shot for Burns at welterweight against the 170lb champion and his former teammate Kamaru Usman.

Burns looked good early on in the fight dropping ‘The Nigerian Nightmare’ in the first round but ‘Durinho’ would later be stopped in the third round.

Furthermore, Chimaev holds an undefeated record of 10-0, the fighter competing out of Sweden has won performance bonuses in all of his UFC bouts so far.

Burns has spoken about working with two secret Russian wrestlers in this camp to help him prepare for Chimaev.

‘Borz’ see’s this move as an act of weakness, he doesn’t believe that Burns can learn wrestling in two or three months when speaking to The MMA Hour.

“He’s said, ‘Maybe we’re going to wrestle, maybe we’re going to grapple, maybe we’re going to come in with strikes.’ He doesn’t know what I’m going to do. He’s stressed. Now he has big drama in his head [that] he thinks about. When you listen to him, you understand — the guy is done. He said, ‘I have two secret Russian wrestlers.’ How you f****** learn wrestling in two months, two or three months? Never. In his dreams, he can’t take me down. He knows that.”

Should the winner of this fight be next in line for a welterweight title shot?