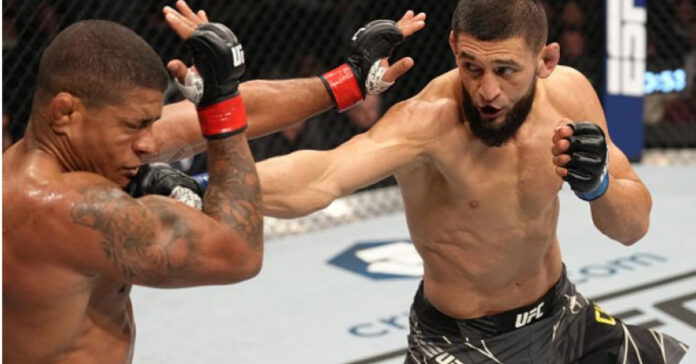 Khamzat Chimaev does not see Gilbert Burns as championship quality.

The top-ranked welterweight contender Chimaev is coming off an all-time classic brawl with the former title challenger Burns. Although Chimaev came out on top in a razor-thin decision win, Burns delivered on the expectation of the bout being Chimaev’s toughest test at UFC 273 in April.

It was one of the fights where neither guy seemed to lose any steam. Burns became an instant fan favorite for his brave performance and did not lose any stock even though he was defeated.

In an appearance on The MMA Hour with Ariel Helwani, Khamzat Chimaev explained that his fight with Burns made the Brazilian popular. While Chimaev was upset that he couldn’t get the finish as he had in all of his prior bouts, he bashed “Durinho” for being content with the outcome.

“I win that fight, [but] I was angry because I didn’t finish that guy. I don’t understand [why] some guys like Gilbert become happy when they lost the fight.”

Chimaev argued that Burns would never become a champion based on his behavior after the loss.

“Going everywhere, doing interviews, and [saying], ‘I’m gonna fight with him again.’ Yeah, we’re gonna fight, whatever, I’ll fight with him whenever he wants, but I don’t see he will be champ, because if you’re happy when you lost the fight, you will never be champ.

“I win my fight, I was like, one month angry at me in training and everything,” Chimaev added. “These things I don’t understand.”

Khamzat Chimaev will return to action against Nate Diaz at UFC 279.