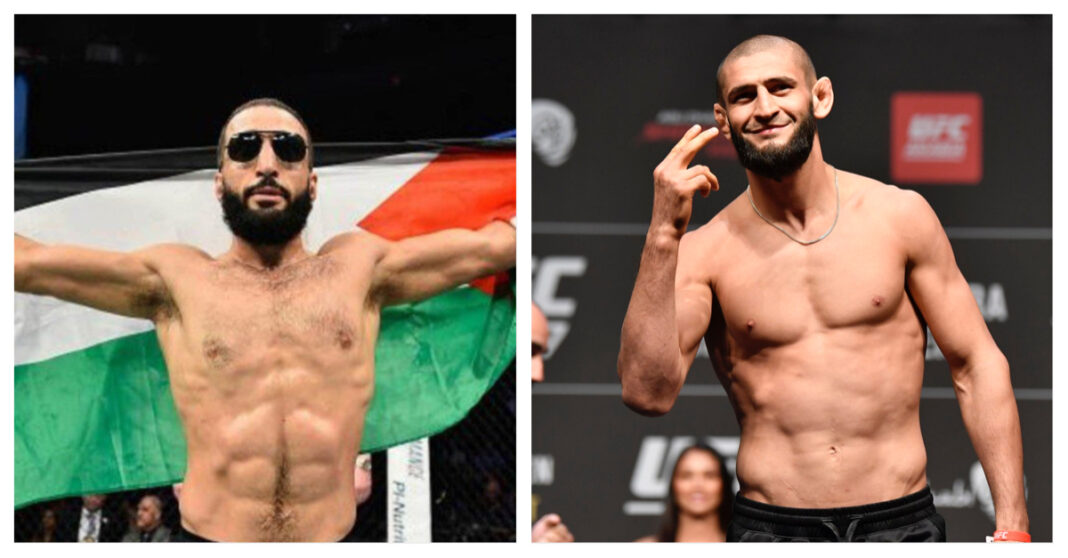 Fellow Welterweight Muhammad had backed Burns to win in the buildup to the fight, despite Chimaev heading into the bout as a heavy favorite.

In what was for many UFC fans a fight of the year contender, the young and unbeaten Khamzat Chimaev managed to outlast the Brazilian in what was an all-out slugfest.

In an interview on ‘Food Truck Diaries’, Belal Muhammad told Brendan Schaub that although Chimaev has shown he is tough, the 33-year-old is confident he has seen some glaring holes in his game.

“I saw weaknesses in him. Obviously, people are like, ‘Oh man, he’s not as good as we thought he was.’ But I’m like, ‘Yo, he showed that he had the chin, he showed that he got power,’ and it’s like – you’re fighting Gilbert Burns.”

The Chicago-born Belal Muhammad is hungry for yet another top contender after coming off three-straight wins against three dangerous welterweights in Demian Maia, Stephen Thompson, and most recently his rematch against Vincente Luque.

These impressive wins have given him the confidence against all styles of MMA that can be thrown at him within the octagon. Muhammad presumes that being able to follow a game plan for 5 rounds is a naivety that Khamzat Chimaev will suffer from.

“When you get to the top five, if you’re not fighting with a strategy, you’re going to lose to the good guys,” Muhammad said. “For me, these last three fights I showed that I could fight with a strategy because they were all different fighters. I fought Demian Maia, who’s – I had to stay up on my feet. I could not get taken down, so it was all defensive wrestling.”

“(He’s) not an easy guy to take down, and I don’t have college wrestling. I’m not a Division-I wrestler, but (I) fight with a strategy, and I dominated more than anybody else has ever dominated him.”

“Then you fight a guy like Luque, who’s knocked me out, who has the most finishes at welterweight and he’s good on his feet and good on the ground. How are you going to beat a guy like that? Oh well, with movement and footwork and then shooting in when he least expects it.” Muhammed exclaimed.

The next fight for either fighter is still yet to be decided, however, in the meantime they seemed to of taken matters into their own hands after verbally agreeing to fight at UFC 281 on Oct. 22 in Abu Dhabi.

Though the plan for Chimaev was originally to put up against Colby Covington, since then his lawsuit against Jorge Masvidal has been prolonged.

Belal Muhammad has been putting his name forward and is ready to fight him next as he is eager to get back into the cage as he aims to put his name within a Welterweight title picture.

“I showed that I could be a different fighter every single fight,” Muhammad added. “And I think that Khamazat’s team is looking at that like, ‘Let’s look for somebody else at this moment, let’s not try to jump on that,’ because if Colby (Covington is) out and I’m willing to fight you, we could fight in June, we could fight in July. I’m ready to go. Why aren’t you guys willing to step up that quick?” (Transcribed by MMAJunkie.com)