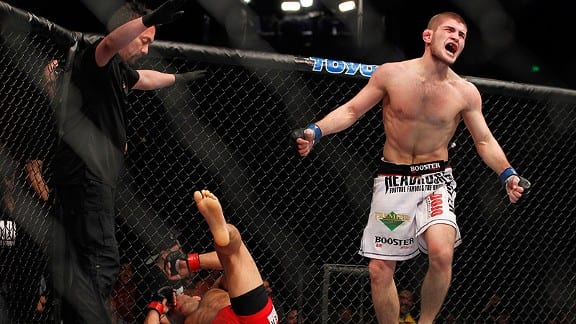 UFC lightweight Khabib Nurmagomedov continues his impressive streak at lightweight, owning 22 wins with no losses overall, six of which were in the UFC octagon. Last seen winning a lopsided decision against Rafael dos Anjos in April, “The Eagle” was briefly booked in to face Donald Cerrone at UFC 178. A knee injury just moments after the announcement meant he was scratched from the card, and has since had an operation for the torn meniscus.

Speaking with The MMA Hour today, Nurmagomedov discussed his injury, and the future:

“I’m going to rehab everyday and working my knee. I want to come back stronger, after this I will get my belt. I was happy to learn I was fighting Donald Cerrone, I went straight to the gym. After 20 minutes of training I had the injury to my knee. I think right now I am the number one contender. Gilbert Melendez had a shot, and he lost. He beat Gilbert Melendez but he isn’t top 15. I think my next fight should be a title fight. Melendez is 1-1 in the UFC, and I have smashed six guys in the UFC.”

It’s always difficult campaigning for a title shot in the UFC, but “The Eagle” certainly has the added advantage of being unbeaten. Equally difficult is the choice to sit out or stay active, but I suppose his injury took care of that one. He continued:

“If the UFC says I have a fight, I’ll go and fight. After Gilbert Melendez, I am number one contender-%100. Everybody wants me to fight (Anthony) Pettis, that is a big fight. I think he doesn’t want the fight; my style, pressure and top control is not good for him. He says he wants to fight Nate Diaz, but Diaz has lost many times in the UFC. You know why he is quiet about me, he doesn’t want this fight.”

“I think he knows my name, but he doesn’t have respect for me. Next year he will know my name, %100. I think I am also a bad fight for Donald Cerrone. Maybe he is a good guy, but he is my opponent and I want to smash him. I think “Cowboy” wins the fight against Alvarez. He is in good shape, and has a good mentality now. Khabib Nurmagomedov vs Anthony Pettis is a good fight, everybody wants this fight from Europe, and USA to Brazil. 22-0, 6-0 in the UFC, why not give me the fight?”

Nurmagomedov makes a strong case for his title fight, but there is more at play than simply records and he knows it. MMA title fight politics, especially in the UFC, is a very hard nut to crack. “The Eagle” clearly is a victim of entertainment over legitimacy, in my opinion, and could well be waiting for a while with Cerrone vs Alvarez going down at UFC 178.

The UFC 155-pound division is eternally deep it seems, which is great for the fans, but maybe not for the title hopes of Nurmagomedov. Do you feel that the wrestling “Eagle” should get the next title fight, or should he recover first and get another win?