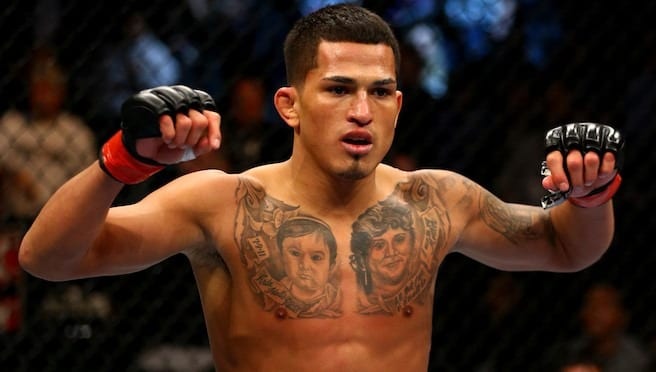 Feisty UFC lightweight Khabib Nurmagomedov vs Anthony Pettis? The Russian Sambo master feels that the champion “Showtime” would be an easy win….

UFC lightweight contender Khabib Nurmagomedov has made a great account of himself since joining the promotion back in 2012. Six wins deep in to his UFC career, “The Eagle” owns wins over Gleison Tibau, Abel Trujillo, Thiago Tavares, Pat Healy and Rafael dos Anjos. Temporarily booked in to face Donald Cerrone at UFC 178, Nurmagomedov suffered a knee injury just hours after the announcement, and has been pretty quiet since.

That is, until now. Check out what MMAFighting’s Shaheen Al-Shatti quoted over Twitter:

More Nurmagomedov to @arielhelwani: “He does not know how to say my name. Next year, he will know how.”

That might be the first time I’ve heard someone refer to a championship MMA fight as ‘easy money’, and especially one against lightweight champion Anthony Pettis. “The Eagle” boasts a quality 22-0 record, but is yet to really have his breakthrough fight. Although on a six-fight promotional streak, there hasn’t been any serious title talk for him just yet.

The situation with Pettis’ injury, and him being booked in to face Gilbert Melendez after their stint on TUF 20 has somewhat held the division up. Who knows, maybe the timing of Nurmagomedov’s return would have him in favor for a title shot? With “The Eagle” holding a dominant win over top 10 RDA, it’s hard to argue against anything less than a contender fight for his eventual return.

Perhaps the winner of Eddie Alvarez vs Donald Cerrone at UFC 178 would be a realistic return fight, or do you think “The Eagle” deserves a title shot right away?