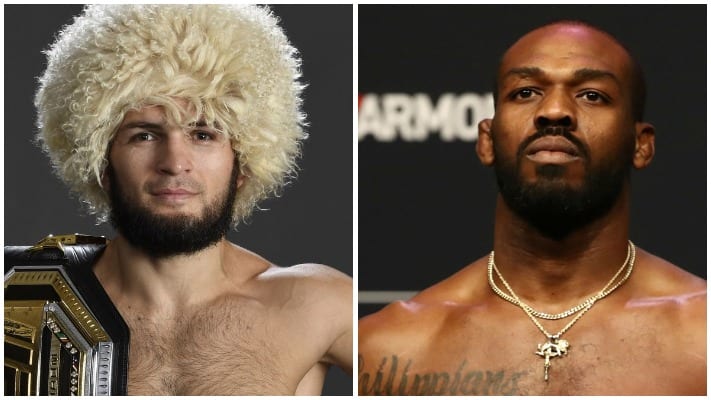 UFC lightweight champion Khabib Nurmagomedov has officially moved into the number one spot on the official pound-for-pound rankings in the aftermath of UFC 254.

Nurmagomedov made easy work of interim titleholder Justin Gaethje on Yas Island this past weekend. ‘The Eagle’ needed just two rounds to choke Gaethje unconscious and unify the 155lb division for the second time in as many fights.

Speaking post-fight, the undefeated Russian announced his retirement from MMA. During that announcement Nurmagomedov humbly requested the UFC give him the number one spot on the pound-for-pound rankings.

“Only one thing what I want from UFC — Tuesday, you guys have to put me No. 1 pound-for-pound fighter in the world because I deserve this,” Nurmagomedov said.

On Tuesday the UFC dropped the below video confirming Nurmagomedov had topped the P4P rankings.

‘The Eagle’ took to social media and reacted to the news, he wrote.

“It was work of my life, I never got anything easy, and nothing was given to me because I’m nice guy. Hard work, hope for Allah and patience, this three ingredient helps me to get successful, and of course, control and advises from my Father, who invested in me a lot of time and work.”

Jon Jones has been vocal about his belief he is the greatest fighter of all-time and therefore should maintain his position as the number one fighter in the current P4P rankings. He was not happy to hear Nurmagomedov had knocked him off the top spot he had held for years. ‘Bones’ took to social media to voice his frustration.

This is number one bullsh*t,” Jones wrote on Twitter. “Unanimous decision over last minute replacement Al Iaquinta to become champion Conor McGregor is the only opponent he’s ever had that the general public actually knew. Catapulted my man to becoming the best ever, this is hilarious.”

Do you think Khabib Nurmagomedov should be ranked ahead of Jon Jones in the UFC’s pound-for-pound list?