LowKickMMA.com
Home UFC News Khabib Nurmagomedov Reveals His Celebrity Pick For A Fight: “I Can Take... 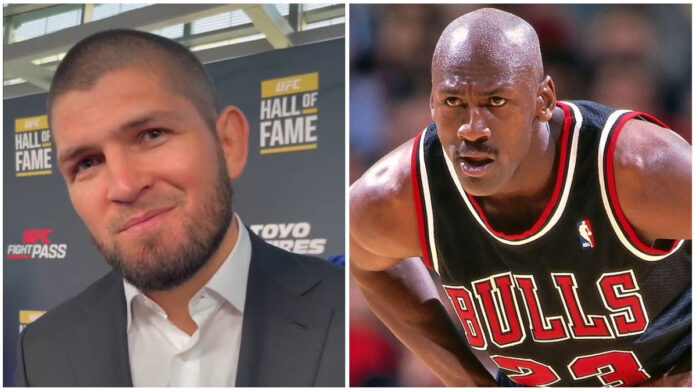 Khabib Nurmagomedov has revealed his pick for the celebrity he would like to fight in a hypothetical contest.

Former UFC Lightweight champion Khabib Nurmagomedov managed to achieve a status rarely seen in MMA, retire at the most elite level undefeated. The legendary Dagestani was inducted into the UFC Hall of Fame last Thursday night. He spoke to the media about his unblemished career and answered some random questions as well.

Khabib Nurmagomedov reveals his celebrity pick for a fight

“Michael Jordan,” Khabib answered. “Yes, you know why? I feel like I can take him down.”

Michael Jordan is arguably the best basketball player of all time having won six NBA championships with numerous other honors. Jordan has a much larger stature of 6 foot 6 at 216 lbs whereas Khabib would stand at about 5 foot 10 weighing in at 155 lbs during his competition days.

Although ‘The Eagle’ appears to be much lighter on paper, weight cuts are a drastic measure taken in the sport and his normal walk-around weight is reported to be around 190-200 lbs.

Khabib explained that he believes he could take Jordan down. He holds the record for having the most takedowns in a single UFC fight, scoring 21 takedowns on 28 attempts in three rounds against Abel Trujillo at UFC 160. In a recent video that did rounds online, Khabib dominated former UFC Middleweight champion, Luke Rockhold, in a grappling session ahead of his return.

A much better comparison perhaps would be Khabib playing the same sport as Jordan. No doubt Khabib would win if the two played ‘Dagestani Basketball’, which is the closest match but maybe just a little too different for an accurate read.