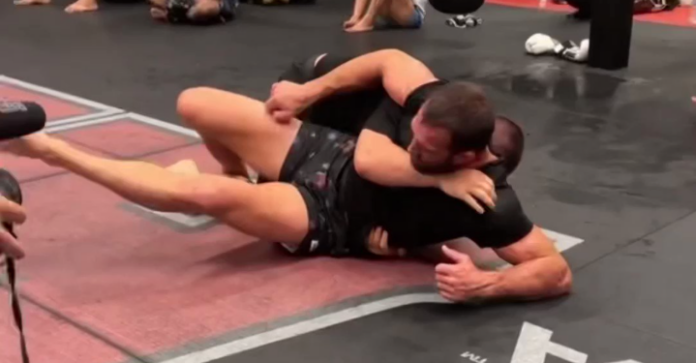 Khabib Nurmagomedov, a former undisputed lightweight champion under the UFC banner, retired from the sport back in October 2020, submitting former interim titleholder, Justin Gaethje with a second round triangle to successfully unify the crowns.

For Rockhold, the former UFC and Strikeforce middleweight champion is slated to make his first Octagon walk since the summer of 2019 in a rescheduled UFC 278 clash against one-time division title challenger, Paulo Costa on August 20. in Salt Lake City.

The veteran Santa Cruz native was initially slated to meet with the Belo Horizonte striker at UFC 277 on July 30. in Dallas, Texas, however, the pairing has now been moved a month later due to currently undisclosed reasons.

Rockhold was initially slated to feature at UFC 268 back in November at Madison Square Garden against Sean Strickland, however, a back injury forced the shelving of the matchup. Rockhold has yet to feature since a knockout defeat to former light heavyweight gold holder, Jan Blachowicz in 2019.

Khabib Nurmagomedov jokes about the grappling ability of Luke Rockhold

A decorated Brazilian Jiu-Jitsu grappler, Rockhold, who holds an impressive eight career submission victories, found himself on the receiving end of a grappling masterclass by the dominant Khabib at their native American Kickboxing Academy base in San Jose, California – with Khabib poking fun at the former’s grappling ability, compared to his Sambo expertise.

In his most recent professional victory, Rockhold managed to land a second round submission to strikes win over former two-weight WSOF champion, David Branch in February 2017 in the main event of UFC Fight Night Pittsburg.

In his time away from the sport, Khabib has been continually linked with a return to active competition, particularly in the form of a potential future fight against fellow former undisputed lightweight kingpin, Charles Oliveira.