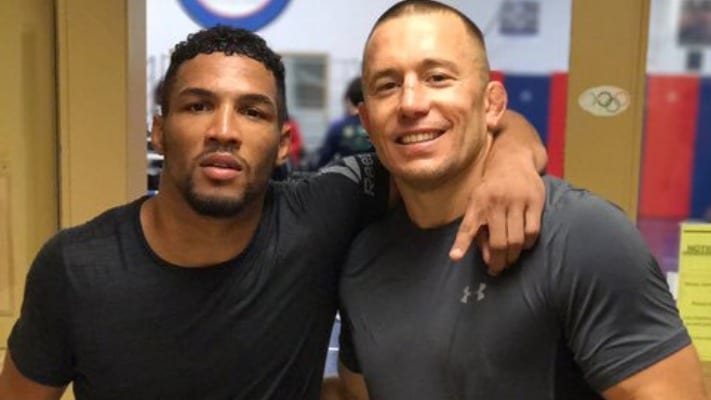 Its been a rough go of things for Kevin Lee as of late inside the Octagon. “The Motown Phenom” is currently on a two-fight losing streak.

In his last outing, Lee was submitted in his welterweight debut against Rafael dos Anjos. Prior to that, he was bested by Al Iaquinta at lightweight. Lee has been trying to find the right coaching staff to help guide his mixed martial arts (MMA) career, and seems to have found the right home with Firas Zahabi and Georges St-Pierre at TriStar gym; a move Joe Rogan recently suggested on his podcast.

Lee explained his decision to join TriStar during a recent interview with Submission Radio:

“I just got done doing this crazy seven-week tour of going around to different camps. I went to LA, I went to Phoenix, I went to Denver, I went to Montreal, and I’m back in Vegas now. But you know, (I went) to try and find that guy out there, that somebody who would really speak to me. And to be honest, I feel like I did in Montreal with Tristar and Firas Zahabi.

“And just having him and being around him and getting to pick his brain and his mind and seeing how it works, I feel like that’s what I’ve been missing. I know that’s what I’ve been missing a little bit ever since my coach Robert Follis passed, I haven’t had that guy to really guide me and show me the correct way of what to do, and I’ve just been kind of trying to listen to myself and figure I got it enough.

“But it’s been a real growing process for me to understand I gotta listen to other people sometimes. And even though this is an individual sport, even though I am the only one stepping in there, it’s such a team effort of being able to rely on somebody else’s experience.

“So, working with Firas, who’s going to be the biggest addition to my camps, going up and training with Tristar with all these guys, is gonna be a big one for me. So, I’m taking it one step at a time and that’s the only thing I’m focused on.”

Of course, getting the opportunity to train alongside a legend such as “GSP” is a huge bonus in joining the Montreal camp. Lee said St-Pierre showed him around the city, and admitted things between them are cool despite Lee calling him out in the past:

“Yeah, I mean, me and Georges are cool. We pretty much hung out the whole time. He showed me around Montreal, he showed me all his little spots. We cool. You know, at the end of the day, he understands it. We’re martial artists, we’re competitors. If I’m not trying to push myself to the limit and I’m not trying to fight the best that’s out there, then I feel like he wouldn’t understand me as much.

“I think he’s got the same kind of fire in him. So, he gets it. I mean, I’m a competitor, I’m gonna try and fight the best of the best. So, I think that’s like the biggest compliment that I could pay to you, is by trying to fight you. If I’m not trying to fight you and you’re a bum on the streets, than you’ll probably be more upset at me. So, we’re cool.

“We talked, we hanged. I mean, he’s going to train with me a lot, so I feel like he’ll be another one of those great minds that I can kind of pick. And seeing what makes him tick and what made him such a great champion, those are the things that I think will boost me to the next level.”

What do you think about Lee jumping to TriStar and training under the tutelage of “GSP?”