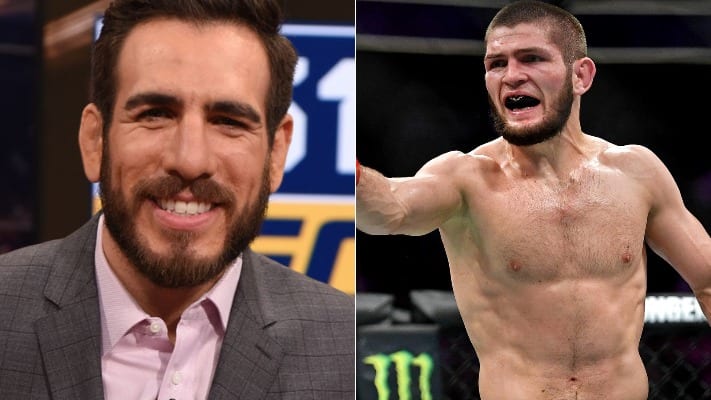 “The Eagle” currently holds a perfect record of 27-0 and reigns as the UFC lightweight champion of the world. Khabib will unify his 155-pound strap with Dustin Poirier at UFC 242 next month in Abu Dhabi. The Russian grappler is the betting favorite heading into the fight.

Speaking on the “Pull No Punches” podcast, former UFC fighter Kenny Florian offered his thoughts on Khabib and named a few fighters he believes has the potential to beat the undefeated grappler. Florian started off by giving an interesting name in Brazilian jiu-jitsu ace Ryan Hall. (H/T BJPenn.com)

Florian then went on to name two more interesting names that he believes can beat Khabib. Those being Georges St-Pierre and Justin Gaethje.

“We have Georges St-Pierre,” Florian said. “He does have a very high level of wrestling. He’s also very big. That probably not going to happen. GSP it seems is retired for good now. As she should, he absolutely deserves that and has done everything in the sport that you can do.

“Justin Gaethje. He comes from a wrestling background and he does hit extremely hard. I think he’s one of the few guys who might be able to give Khabib a tough time. If he does stuff the takedowns he does have the power in the striking to knockout Khabib.”

What do you think about Florian’s picks for who he thinks can beat Khabib?