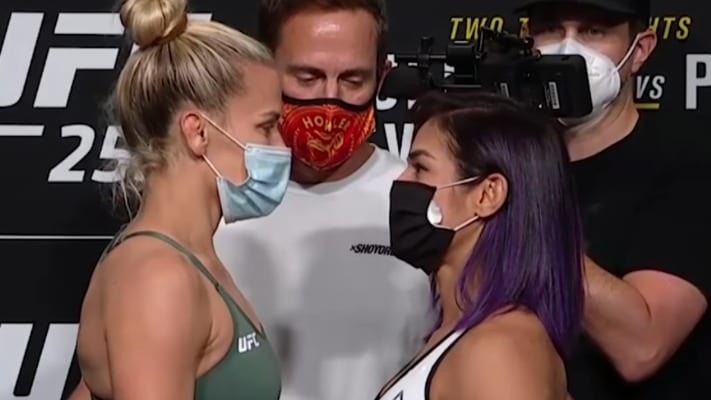 Next up on the UFC 255 main card is a women’s flyweight encounter between Katlyn Chookagian and Cynthia Calvillo.

Round 1: The pair engage in plenty of striking to start the fight. Calvillo gets Chookagian down momentarily only for the latter to get up as they return to striking. Chookagian is the more active striker. Calvillo lands a leg kick and follows it up with a takedown attempt but Chookagian sprawls and defends superbly. Chookagian seems to have the edge in the striking but receives a big right from Calvillo. Calvillo lands a counter left hook. Chookagian continues to throw strikes but doesn’t land as much as the round comes to an end.

Round 2: The fight returns to striking as it’s more of the same. Chookagian is the one advancing forward as both fighters land during flurries. However, Calvillo is struggling to pull the trigger. Chookagian lands a nice front kick to the body. Chookagian blocks a high kick and returns with a leg kick. This has been a more dominant round for Chookagian as Calvillo is starting to wear a lot of bruises on her face. The round comes to an end with what has been a Chookagian clinic.

Round 3: Chookagian continues to lead the fight as Calvillo needs to show some urgency and look for a finish. Calvillo lands a nice leg kick. Chookagian looks like she’s taking the round off but she continues to land on Calvillo. Calvillo slips and blocks a head kick from Chookagian soon after. Calvillo momentarily looks for a takedown but Chookagian defends and they return to striking. It’s all Chookagian now even though Calvillo is having more success in this round. Calvillo lands a one two. Both fighters are swinging to end the fight. It comes to an end and it should be a comfortable decision victory for Chookagian.