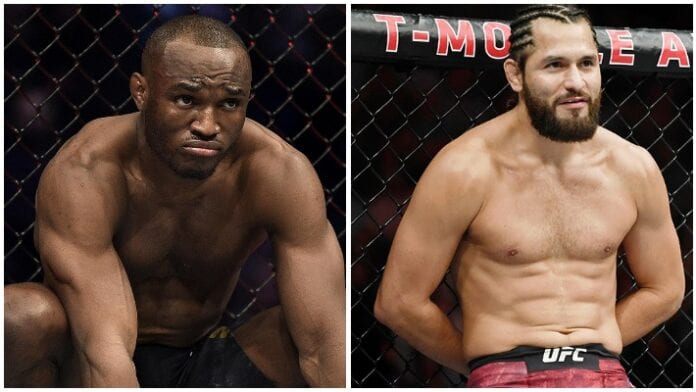 UFC welterweight champion Kamaru Usman will defend his title against number one contender Jorge Masvidal on July 11 barring any positive tests for COVID-19.

Burns was expected to face ‘The Nigerian Nightmare’ on ‘Fight Island’ next weekend, July 11. Unfortunately, ‘Durinho’ and two of his team tested positive for COVID-19 shortly before they were due to fly out the island for fight night. Therefore, he has been pulled from UFC 251 leaving Usman without an opponent.

Since then Ariel Helwani has reported Usman and Masvidal are signed to fight subject to COVID-19 tests, he wrote.

“The Usman-Masvidal talks are ongoing and moving in a positive direction. While there are still multiple hurdles left, feeling confident about the direction of the talks and barring any last-minute issues it appears inevitable this fight gets done.”

“What hurdles? Well, just because a fight gets signed in 2020 doesn’t mean it’s happening. They’ll have to fly to Vegas in the next day or so, take a COVID test, quarantine, pass the test, fly to Abu Dhabi, take another test upon landing, pass that test, another test Friday, too.”

Masvidal was first to react. He took to Twitter to celebrate Independence Day and predict his upcoming fight with Usman, he wrote. “Happy 4th of July everybody! The resurrection. And New. And Still.”

Usman also took to social media to react, he posted the following meme when the news broke.

Prior to that Usman also made reference to a pig squealing as negotiations for the fight got serious, he wrote. “Might be time for the pig to squeal.”

Usman and Masvidal have been involved in an intense rivalry over the past six months while negotiations dragged on for their fight. Ultimately ‘Gamebred’ withdrew from fight talks due to the UFC requesting he take a 50 percent pay cut for the fight. He vowed to sit out and fight for fair pay. Masvidal now appears to be happy with his payday to fight for the welterweight belt and will travel to Yas Island for his first shot at UFC gold.

Who do you prefer to see Kamaru Usman defend his belt against at UFC 251? Gilbert Burns or Jorge Masvidal?