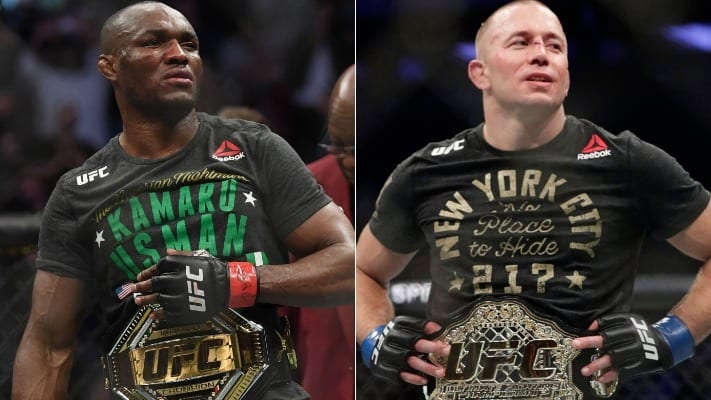 Once again, Kamaru Usman has demonstrated why he is deserving of the 170lb title strap he wears around his waist. A clinical display of striking on Saturday night against Gilbert Burns, demonstrated how well rounded a martial artist he is. Having been victorious over Burns, there are now very few welterweights in the UFC that Usman has not yet defeated.

Usman initially called out Jorge Masvidal. Offering ‘Gamebred’ the chance for a rematch, this time with a full camp. However in the post-fight press conference, ‘The Nigerian Nightmare’ raised the case for an even bigger opponent. This matchup being with Georges St-Pierre, the only man who could challenge Usman’s status as the greatest welterweight in the world. Usman had the following to say about GSP:

“I love George, I really do. I mean, one of the inspirations early when I started watching this sport but I’m a whole different animal nowadays. It’s a different ball game, I love George, I think George is tough, you know. I consider him one of the greatest but I fight with me and George, okay. George was massive with the jab but you saw what I did with jabs” (as transcribed by SportSkeeda).

GSP has been retired for some time now, and his last fight was at middleweight in 2017. He has not fought at welterweight since 2013 when he picked up a close decision victory over Johnny Hendricks. However, ‘Rush’ holds one of the most impressive resumes in UFC history, and is a constant contender for GOAT status. Despite this, UFC president Dana White has stated that he believes Usman will surpass GSP. One way to begin challenging GSP’s status would be to face him in the octagon. St-Pierre has previously expressed interest in fighting Khabib Nurmagomedov, so the idea of him returning to the sport is not unfathomable.

Do you believe we may see GSP face off against Kamaru Usman at some point in the future? Let us know in the comments.

Joanna Jedrzejczyk Reacts To Being Pulled From The Rankings