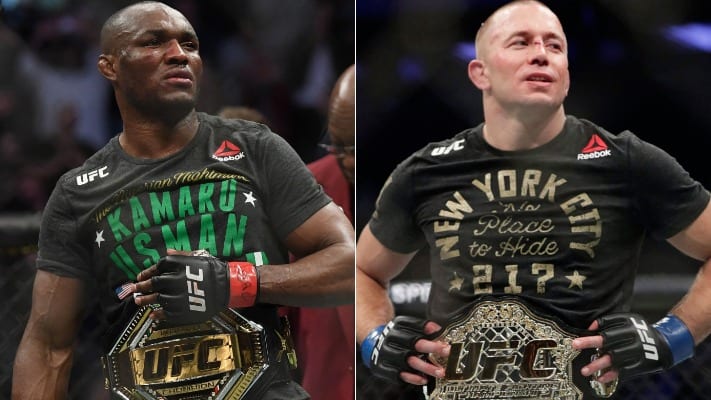 Following his successful title defense at UFC 258, Dana White heaped praise on Welterweight champion Kamaru Usman stating that he believes it is only a matter of time until he becomes the greatest fighter to ever compete in the weight class.

During his main event at UFC 258, Usman broke Georges St-Pierre’s former standing record of the longest winning streak in the division notching his 13th win in a row against his former teammate.

“He just broke his record tonight,” White said about Usman breaking St-Pierre’s record at the Post Fight Press Conference. “If you look at what he just did he broke his record tonight for consecutive wins, and if this guy keeps rolling, if Usman can keep doing what he’s doing, he’s going to go down as the greatest Welterweight ever. Fact.”

“Just look at who he’s fought and who he has to fight here in the future, it’s undeniable that this guy will go down as the best Welterweight. The question is, where will he go down in the history of the sport?”

While St-Pierre has officially retired from the sport, hailed by many as the greatest fighter of all time, there has been a report that the former Welterweight and Middleweight champion could potentially make a return to face Khabib Nurmagomedov in the near future.

As far as future opponents, White believes that the murderers row at Welterweight will help in solidifying Usman’s legacy.

““This guy’s got nothing but badass dudes lined up ahead. If he doesn’t have the respect now, he should’ve got it after the Covington fight. I can’t stop talking about the Covington fight. One of the greatest fights I’ve ever seen. Anyone who didn’t respect him after that? That’s your problem, not his.”