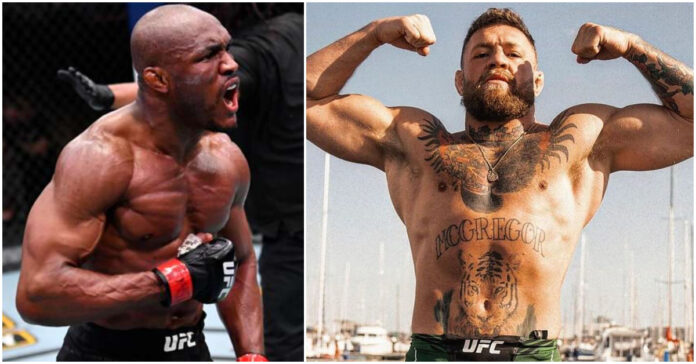 Former two-division champion Conor McGregor is expected to return to the octagon sometime this year after his recovery from the broken leg injury he suffered against Dustin Poirier at UFC 264 is complete. While many names have been brought up for his eventual return like a trilogy fight with Nate Diaz, a fourth fight against Dustin Poirier, and a crack at the lightweight title against Charles Oliveira.

One man that ‘The Mystic Mac’ wants the most is the current pound-for-pound king Kamaru Usman. ‘The Nigerian Nightmare’ has established his space in the fight game as one of the most dominant welterweight champions ever having lapped the division with multiple wins over opponents like Colby Covington and Jorge Masvidal.

Usman has gone back and forth with the Irishman on social media in recent encounters. In an interview with TMZ Sports, Kamaru Usman responded to McGregor aiming for a shot at the 170-pound title.

“This guy is not relevant. He hasn’t done anything in the sport as of late. So in order for him to be relevant, he has to try to attach his name to someone who is relevant,” Usman said.

With Leon Edwards slated to face the current welterweight champion, Usman still has more exciting match-ups on the horizon. Khamzat Chimaev could be another possible contender to face off against the champion and a McGregor fight could happen as well given that no announcements have been made regarding the Edwards fight.

Conor McGregor has remained on the sidelines since July 2021 when he suffered a horrific broken leg injury during his last outing in the cage against ‘The Diamond’ at UFC 264. It’s unclear when he expects to return and who he’ll face off against when he does. ‘The Notorious’ has kept the public updated on his recovery with regular videos tracking his progress.

In an interview with The Mac Life in March, McGregor expressed his desire to become the first fighter in the promotion’s history to win world titles in three different weight classes.

“Myself versus Usman for the 170-pound title in my comeback fight is the one I’m eyeballing at the minute,” said McGregor. “Why cut the weight? I’ve already won the 155-pound title. I got myself to a lightweight frame, but you know, I’m big now. I feel big. I feel strong. I feel healthy. I’ve got good energy. I’m coming back from a gruesome injury. I don’t want to be depleting myself. There should be no need to deplete myself.

“And I feel confident against Usman — a jab-happy, sloppy, orthodox wrestler with no submissions whatsoever. What’s he going to do? Where’s the danger here? I don’t see danger. … No one has ever obtained three titles in three divisions like I will do if we make this fight.”

Would you like to see Kamaru Usman fight Conor McGregor?